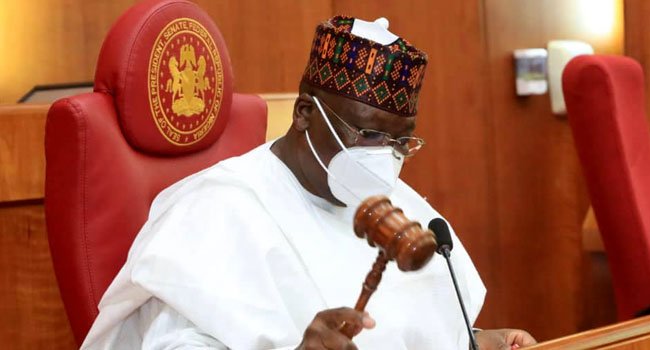 The Nigerian Senate today rescinded its unpopular position on clause for voting, the transmission of electronic results which empowered the Nigerian Communication Commission (NCC) to determine the suitability of transmission of results, subject to the approval of the National Assembly.

The Senate’s decision followed consideration and approval of motion on “Re-Committal of Some Clauses of the Electoral Act repeal and Re-enactment Bill 2021” at plenary on Tuesday.

Senate had on July 15, amended clause 52(3) of the bill to empower NCC to determine the suitability of network for transmission of results electronically with the approval of the National Assembly.

Clause 52(,3) of the draft bill had originally prescribed that INEC shall determine voting at election and transmission of results, which may include electronic voting.

The clause was, however, amended to empower NCC to determine the suitability of the network for electronic election processes with approval of the National Assembly.

Senate’s decision had afterward generated heated debates among Nigerians and civil society groups. Most Nigerians had questioned the decision, saying that it was meant to undermine and erode the constitutional powers of INEC to conduct elections in Nigeria.

Presenting the motion for re-committal of some of the clauses on Electoral Act repeal and re-enactment bill 2021, Senator Abdullahi Abubakar (APC-Kebbi) said after critical examination of the bill by the Senate Committee on INEC, noted that there were some fundamental issues that required fresh legislative action on some clauses.

He said there was need to address the observation by the committee and make necessary amendments based on order 1 (b) and 53(6) of the Senate standing order.

“Senate accordingly rescinds it’s decision on the affected clauses of the bill as passed and re-commit same to the committee of the whole for consideration and passage ,” Abubakar said.

Contributing, Sen.Adamu Alero (APC-Kebbi), who seconded the motion said the motion would strengthen the electoral process and give Nigerians more power to select their desired leaders.

He said the motion if adopted, would help the electorate to ensure that questionable characters are not elected in governance. According to Alero, the motion would discourage money bags from taking over and determine the outcome of elections in the country.

Adeyemi, however, said a motion to amend the clause to introduce direct primaries would make the electoral process burdensome to the people.

Other Senators, who also supported the motion for amendment include Senators Opeyemi Bamidela (APC-Ekiti) Enyinnaya Abaribe (PDP-Abia)Abdulfatai Buhari (APC-Oyo). Senate after a voice vote amended clause 52  to now empower INEC to determine the mode of voting and transmission of results.

Other clauses that Senate rescinded its decision was on clauses 43, ,63, and 87. which borders on the mode of conduct of primary elections by political parties, ballot boxes and voting devices

President of Senate, Ahmad Lawan in his remarks, urged members of the Senate conference committee to take into consideration, the debates of senators during harmonisation of the bill with the House of Representatives Conference Committee.