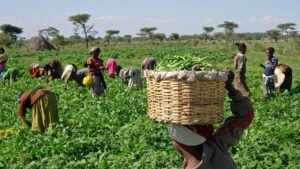 Some maize farmers in Kano State have resorted to planting sorghum due to the high cost of fertilizer, instead of maize and other crops.

The News Agency of Nigeria (NAN) reports that the farmers use manure obtained from animals dung and waste for the crops, with little fertilizers.
The farmers also practised mixed cropping where they planted sorghum with groundnut, beans or soyabean, to enhance fertility of the soil for more crops productivity.
A check by NAN revealed that a bag of fertilizer costs about N25,000 and above, depending on the type and brand of the commodity.
Alhaji Muhammad Tukur, a farmer, said every year he planted maize, but this year, he planted guenea corn, because of the high cost of fertilizer.
Tukur said that would enable him to spend little money in nursing the crops up to the harvesting period.
He added that he practised mixed cropping, where he was mixing the crops with soybeans that also required less fertilizer.
Another farmer, Malam Abba Zakariyya, said that he planted guinea corn because he coul  not afford to plant maize due to the high cost of fertilizer.
Zakariyya said that he used manure and little fertilizers for the crops.
In his contribution, Prof. Abdu Ahmad-Manga, Agronomy Department, Bayero University, Kano (BUK), said that guinea corn required less amount of fertilizers compared to maize.
He said that sorghum was an indigenous tropical crop, unlike maize that was brought into the country from some parts of the world.
Ahmad-Manga said that maize required at least two fertilizer applications, first after planting it within about two weeks, and the second one after three to four weeks.
“If you miss fertilizer application at an appropriate time, it will not grow properly, and nothing can be done to change it.
“While for geunea corn, even if you missed the first fertilizer application, one may still apply it and get something, because it is more durable than maize,” he said.
He further noted that before the introduction of maize into the country, sorghum was the staple food.
“Sorghum is more important than maize, though, both are cereal crops that provide carbohydrates, but sorghum is more important to the human body than maize,” he said.
(NAN)
Sign in
Welcome! Log into your account
Forgot your password? Get help
Password recovery
Recover your password
A password will be e-mailed to you.