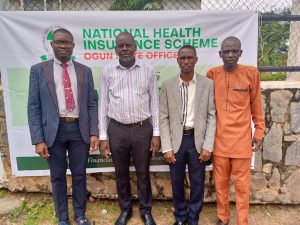 The National Health Insurance Authority (NHIA) says it will not hesitate to prosecute any erring hospital or pharmaceutical company that undermines the workings of the health insurance scheme.

Acting Coordinator of  NHIA in Ogun, Mr Bode Adeleke, made this known on Tuesday at a one-day sensitisation workshop for stakeholders in Abeokuta.

NAN reports that NHIA hitherto referred to as National Health Insurance Scheme (NHIS) was changed and signed into law by an Act in May, thus repealing the 2004 Act of the NHIS.

According to Adeleke, the new nomenclature -NHIA, gives the agency more power and coverage to sanction and prosecute erring stakeholders.

He said that the agency had battled with fake drugs in the recent past hence the resolve to sanction or prosecute any facility found culpable.

He said fake drugs had made enrollees to question the efficacy of some drugs presented to them at health facilities.

Adeleke disclosed that the authority would come out with its own branded drugs to address the issue of generic and branded drugs often encountered at the health facilities.

“We have a new idea in the aspect of drug production.

“In the past, people have had problems with perception of drugs.

“They complain about efficacy of drugs and the services rendered in hospitals,” he said.

According to Adeleke, with the new Act, NHIA has more regulatory powers.

“We can close down erring hospitals, pharmaceuticals or stand-alone providers like opticians or opthalmologists.

“We can regulate them now, close them partially or totally. But before now, we cannot do that because we didn’t have the regulatory power,” Adeleke said.

The NHIA coordinator added that the new Act also presented an opportunity to enrol virtually everybody, especially the vulnerable in the society.

According to him, health insurance remains the key to universal health coverage more over as the Federal Government will foot the bills.

Some of the stakeholders at the workshop enjoined the government to aggressively sensitise the public on the need for them to key into the scheme under the new authority.

Dr Abiodun Amusan, Director of Health, Federal University of Agriculture Abeokuta (FUNAAB), urged the authority to as a matter of urgency reach out to stakeholders to key into the scheme.

He said that many workers were yet to enrol for the scheme, with the argument that the federal government promised them free healthcare at the point of entry.

“Some of them have refused to enrol in the health insurance scheme.

“Some hide under their spouses to enjoy the scheme without paying a dime from their salaries.

“There is need to do something about it,” Amusan said.

The Coordinator, Police Health Maintenance Ltd., Okechukwu Mba, advised the agency to carry out a thorough sensitisation programme for enrollees and the public on the efficacy of the proposed NHIA branded drugs.

He said that many people were still skeptical about using generic drugs presented to them at health facilities.