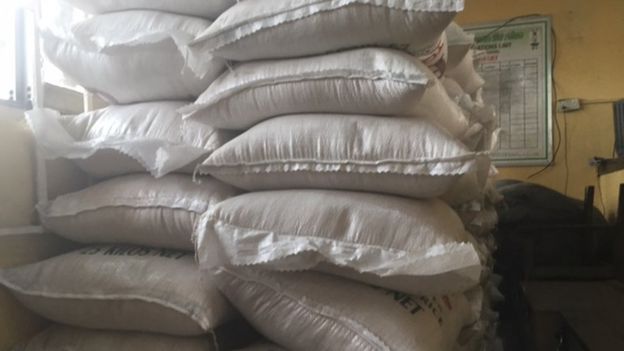 2.5 tonnes of “plastic rice” smuggled into the country by unscrupulous businessmen, were confiscated according to reports given by customs service.

Lagos customs chief Haruna Mamudu said the fake rice was intended to be sold in markets during the festive season.

He said the rice was very sticky after it was boiled and “only God knows what would have happened” if people ate it.

It is not clear where the seized sacks came from but rice made from plastic pellets was found in China last year.

Whoever made this fake rice did an exceptionally good job – on first impression it would have fooled me. When I ran the grains through my fingers nothing felt out of the ordinary.

But when I smelt a handful of the “rice” there was a faint chemical odour. Customs officials say when they cooked up the rice it was too sticky – and it was then abundantly clear this was no ordinary batch.

They’ve sent a sample to the laboratories to determine exactly what the “rice” is made of.

They are also warning the public not to consume the mystery foodstuff as it could be dangerous.

Fake food scandals are thankfully rare in Nigeria when you compare it to countries such as China.

The big scandal here is fake pharmaceutical drugs that kill a huge number of people every year.

Investigations are under way to establish how much of the contraband has already been sold.

The customs official called on “economic saboteurs who see yuletide season as a peak period for their nefarious acts to desist from such illegal” business activity.

Mr Mamudu did not explain how the plastic rice was made but said it had been branded as “Best Tomato Rice”.