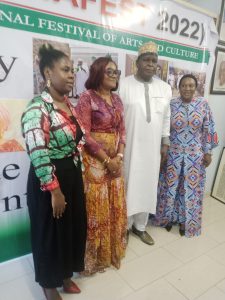 The National Council for Arts and Culture (NCAC) has called on the Nigeria Association of Tour Operators (NATOP) to harness culture and tourism potential, to assist in boosting the nation’s economy.

The Director-General of the NCAC, Otunba Olusegun Runsewe, gave the advice on Wednesday when the NATOP executives, led by its National President, Mrs Ime Udo, paid him a courtesy visit in his office in Abuja.

Runsewe, who said that the nation’s tourism destinations were largely untapped, urged the association to harness and develop those potentials to improve the nation’s Gross Domestic Product (GDP)

“There are many tourism destinations that are not harnessed and developed in this country.

“Kogi State, for instance, has a major history tourism profile such as Mango Park, Ajayi Crowther’s house and the First Governor General, Lord Lugard’s house. Nobody has tapped it.

“So, we would have used these ones in Kogi for tourist centres for anybody coming to go and see,’’ he said.

The director-general stressed the need for stakeholders in the tourism sector to devise strategies in marrying both cultural and artificial tourism together while marketing tourism potentials to the world.

“When I was in the Nigerian Tourism Development Corporation (NTDC), any country I travelled to, the first place I go in the morning is the prison of that country.

“And people have been saying what is wrong with this man. What has prison gone to do with the tourism.

“When you are going to market and sell your country, you must know the strength, opportunities and weaknesses of your country in that country.

“So, this has come as a time we must quickly understand that NATOP is very key to improving the GDP of Nigeria,’’ Runsewe said.

Runsewe recalled that in 2016, he took all the state commissioners for tourism to South Africa to tour her tourism destinations and understand the word tourism economy.

“When we got to South Africa, I said to them that I want you to practically come and see. South Africa is selling cultural tourism.

“Dubai is selling artificial tourism. You need to understand all these.

“Now how do you go about it, when we got to Nelson Madella’s house and the then Commissioner for Tourism in Kano State said the house was not large when compared to our past leaders.’’

According to Runsewe, Nigerians need to quickly tap cultural contents that could be marketed by the tourism strategy in the county.

Earlier, Udo said that the purpose of the visit was to partner with the NCAC in areas of promoting culture to drive tourism sector.

According to her, NCAC through its activities largely promotes the culture of Nigeria which is one of our drivers of tourism in Nigeria.

“For every National Festival of Arts and Culture (NAFEST) or International Arts and Crafts (INAC) Expo that is being celebrated, there is an opportunity to grow the traffic of tourists into Nigeria once the synergy and collaboration are there,’’ he said