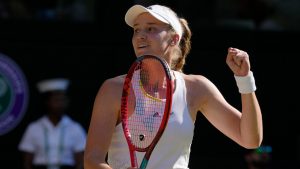 Former Wimbledon champion Simona Halep felt her feeble serve let her down in her defeat by Elena Rybakina of Kazakhstan in Thursday’s one-sided women’s singles semi-final match.
But the former world number one said the grasscourt swing gave her the confidence to keep working hard.
Plagued by injuries last season, the Romanian twice major winner had contemplated retirement.
But the 30-year-old arrived at Centre Court on Thursday having not dropped a set in her five previous rounds.
However, the Russian-born Rybakina broke Halep’s serve four times on Centre Court, with the 2019 champion dishing out nine double faults.
She managed to get only just over half of her first serves in during the 3-6 3-6 hammering.
“Serve a little bit better,” a smiling Halep said, when asked what she could have done better against Rybakina.
“I improved a lot in my serve the last three months. But today I feel like I went back to my normal one. Many double-faults and too soft.
“Definitely if I would have had a better serve today, it would have been better.
“I had three months of changing things. So, probably I need more time to just fix them and to keep them every day. Today probably I was a little bit tired and it didn’t work.”
She made the semi-finals at the All England Club on her return to the tournament for the first time since lifting the Venus Rosewater Dish in 2019.
But before this, Halep had reached the last four stage at Bad Homburg and Birmingham in tune-up events on grass.
READ ALSO:https://brandpowerng.com/fc-barcelona-waiting-for-bayern-munichs-response-to-lewandowski-bid-laporta-says/
Halep, who won her maiden Grand Slam title at Roland Garros in 2018, was looking at the positives of her recent performances.
With this, she wanted to give Rybakina all the credit for the victory.
“I think the last four weeks were pretty good. I take all the positives from those weeks,” she said, adding that her immediate plan was to take a holiday.
“I have confidence because I showed myself that I can play good tennis. But, yeah, today probably was a little bit too much.
“ I am  looking forward to working the same way. I’m sure that it’s going to be better the next week.
“My goal is like the goal I came here (with), just to improve on myself and do what I want to do on court: to be more aggressive, to be creative, and keep the same level every day.
“I kept it, but today was not good enough. I was not good enough,” she said.
(Reuters/NAN)
Sign in
Welcome! Log into your account
Forgot your password? Get help
Password recovery
Recover your password
A password will be e-mailed to you.