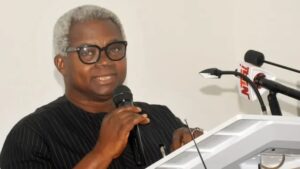 Mr Osita Okechukwu, the Director-General, Voice of Nigeria (VON), says State Governors cannot excuse themselves from being major contributors to deepening poverty and insecurity in Nigeria.
Okechukwu said this in an exclusive interview with News Agency of Nigeria (NAN) in Abuja, while reacting to the position of Nigeria Governors Forum (NGF) that President Muhammadu Buhari should be blamed for the situation in the country.
“Am not the spokesman for the Federal Government or President Muhammadu Buhari, however, as a Buharist, the truism is that the governors have no excuse in contributing to the material conditions which deepened poverty and insecurity in Nigeria.
“They cannot exonerate themselves from the quagmire,” he said.
Okechukwu added that the governors assumed the toga of Emperors and like Pontus Pilate cannot too late in the day, wash off their hands; whereas they collected the 47 per cent of State and Local Government Councils Revenue allocations, plus derivation and Bail Out funds.

“This is without commensurate dividends on the ground,” he said.
He said that the NGF should be reminded that all the federal roads, bridges, dams, primary health care, school feeding programmes, Anchor Borrowers Programme etc were located at the 36 states of the country.

He asked how can the NGF excuse itself when out of self interest it had emasculated local government councils, state judiciary and legislatures.
“Regrettably, the outcome is abject poverty and general insecurity.
“ By emasculating local councils funds, stoping independent funding of state judiciary and state legislatures, the NGF thereby compounded economic inequality and stimulated insecurity, for security is achieved via kinetic and civil strategic means,” he said.
The NGF had through its Director of Media and Public Affairs, AbdulRazaque Bello-Barkindo, said “This dereliction of duty from the center is the main reason why people have been unable to engage in regular agrarian activity and commerce.
“Today, rural areas are insecured, markets are unsafe, travel surety is improbable and life for the common people generally is harsh and brutish.
“The opinion, therefore, of one minister, based on a survey of 56,000 households in a country of 200 million people can never diminish the good work that 36 pro-poor-minded governors are doing for this country.”

Okechukwu in debunking the generalisation of the Governor-Emperors, said that in an unholy bi-partisan alliance while breaching Section 7 of the 1999 Constitution of the Federal Republic of Nigeria as amended, which made democracy imperative in local councils administration; selectively adopted and mangled the Joint Account proviso of the same Constitution with less than public interest.
“Hope the NGF did not forget the trillions Bail Out Buhari doled out to them for unpaid State salaries and pension’s arrears? Most of the Emperors were not prudent with the Bail Out Funds and the fall out is despair, despondency and insecurity at the grassroots.”

“There is no doubt that the Governors-Emperors stymied democracy at the local councils, as none of the State Independent Electoral Commission ever conducted free, fair and transparent elections. The rigging of local councils elections and embracing of Joint Account proviso in the Constitution are the material conditions which enhanced corruption and insecurity at the grassroots.”

“But as I said before security is multi-dimensional and is fought via kinetic and none kinetic strategic means. In other words if as a governor you failed to provide minimal welfare and security, stop independence of State Judiciary and State Legislatures, pay minimum wage, salaries and pensions as and when due, you creating hunger and anger in the communities.
“And a hungry man is an angry man. One must admit that we made some unforced errors; but the Governors-Emperors cannot excuse themselves from the sordid scenario we find ourselves.”