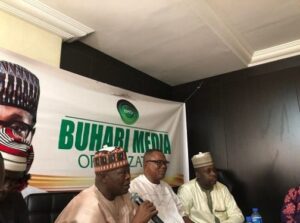 Buba Galadima, a former ally of President Muhammadu Buhari, probably knows a lot more about the terrorists on rampage in some parts of the country than he is telling Nigerians.
Raising this alarm, the Buhari Media Organisation (BMO) said the manner Galadima spoke on the possibility of the President being kidnapped soon showed that the man knows more than he is telling.
In a statement signed by its Chairman Niyi Akinsiju and Secretary Cassidy Madueke, the group said that Galadima spoke like someone who knows what the terrorists want, “and probably how to get it.
“Our attention has been drawn to Buba Galadima’s recent interview with BBC Hausa service, and the confidence with which he spoke about terrorists abducting President Buhari.
“That the assertion came few days after what many Nigerians thought was an empty abduction threat by a terrorist group which attacked a Kaduna-bound train and is still holding 39 passengers since March, should give all patriots cause for concern.
“We heard him saying in that interview that bandits were disdainful of the Buhari administration and we wonder how he knew this, if not that he is in regular touch with the leadership of the criminals.
“Also, being a former ally of President Buhari and is likely to know his routine, we are concerned that Buba Galadima may have passed on some valuable information to the terrorists.
“It is against this backdrop that we urge security agencies not to overlook him in the course of investigating the terrorists’ threat to abduct the President, ” it said.
BMO said that the Buhari administration has not failed in securing the country and urged the authorities to step up their intelligence gathering capacity to counter the fresh wave of security challenges in the country.
(NAN)
Sign in
Welcome! Log into your account
Forgot your password? Get help
Password recovery
Recover your password
A password will be e-mailed to you.