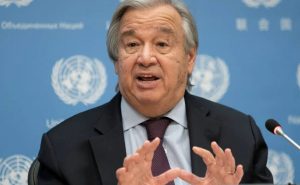 Guterres told G20 Foreign Ministers meeting in Bali, Indonesia in a video message, that stronger collaboration among countries was the only sustainable path to a peaceful, stable, prosperous world for all.

The climate crisis is the number one emergency, he said, warning that  the battle to keep global temperature rise to the 1.5-degree goal “will be won or lost” by the end of the decade.

“You represent the major economies – and 80 per cent of global emissions. The responsibility for preventing the worst impacts of the climate crisis rests largely on your shoulders,” he told the ministers.

Although global missions need to decline by 45 per cent below 2010 levels in order to meet the 1.5-degree goal, current national climate pledges would result in a 14 per cent increase by 2030.

Describing this as “collective suicide”, the UN chief called for a “renewable energy revolution,” with ending the global addiction to fossil fuels as the top priority.

This means no new coal plants, or expansion in oil and gas exploration, he said.

Furthermore, emerging economies must have access to resources and technology to transition to renewable energy.

“Wealthier countries must finally make good on the 100 billion dollars climate finance commitment to developing countries, starting this year. We also need a radical boost for adaptation and early warning systems,” he said.

With the war in Ukraine amplifying other crises, resulting in increased prices for food and fertilizer, the UN chief highlighted the “real risk” of multiple famines this year, and the potential for even worse in 2023.

“We need to work together to bring stability to global food and energy markets and support developing economies.

“Ukraine’s food production, and the food and fertiliser produced by Russia, must be brought back into world markets — despite the war,” he said.

The UN is working to find a plan that allows for the safe and secure export of Ukrainian-produced food through the Black Sea, and unimpeded access to global markets for Russian food and fertilisers.

“But even as we try to increase supplies, we need to make resources and fiscal space available now for the poorest countries and communities.

“The global financial system must use all the instruments at its disposal, with flexibility and understanding, to achieve this,” he said.

Meanwhile, many developing countries have suffered devastating economic losses during the pandemic but cannot access finance for recovery.

Guterres stressed that a New Global Deal was needed to rebalance power and financial resources, and enable these nations to invest in the Sustainable Development Goals (SDGs).

“The international debt architecture requires urgent reform. We need an operational debt relief and restructuring framework that takes account of vulnerability,” he said.

Greater effort is also required to increase the number of countries that can produce COVID-19 vaccines, therapies and tests, by sharing licenses and providing technical and financial support

According to him, the meeting is taking place at an extremely challenging moment for multilateralism and global governance, with the international order at risk of coming apart at the seams.

He cited challenges that included the climate emergency, the COVID-19 pandemic, the war in Ukraine, and new and evolving forms of conflict.

“It is the only way to avoid widespread food shortages, deepening climate chaos, and a wave of poverty and destitution that will leave no country untouched.”

The secretary-general underscored that the world required a multilateralism that was more effective, more networked, and more inclusive, saying “we need to combine the strengths of existing institutions to deliver together on humanity’s most pressing challenges”.

The UN is working with countries to bring forward recommendations contained in the Secretary-General’s ‘Our Common Agenda’ report, which focuses on strengthening multilateralism.

They include proposed Biennial Summits to work towards a more sustainable, inclusive and resilient global economy.

The summits would bring together the G20, the UN Economic and Social Council (ECOSOC), international financial institutions, and the Office of the Secretary-General.