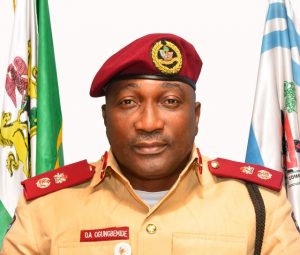 The Federal Road Safety Corps (FRSC) says the Corps has put in place veritable regulatory mechanisms to eradicate all forms of misconduct in the service, including bribery and corruption.
The Corps Public Education Officer (CPEO) Assistant Corps Marshal (ACM), Bisi Kazeem, said this in an interview with the News Agency of Nigeria (NAN) on Friday in Abuja.
Kazeem said the measures already on ground were yielding tremendous results at the moment.
He, however, said that did not mean that the Corps was not dynamic in policy formulation, implementation and service delivery.
NAN reports that there had been reports on how FRSC personnel extort from motorists.
It was reported that they stopped vehicles, ask them the neccessary documents and at the end, drive them to a place, ask for money and also threatened them.
According to him, “one thing I would like you to know is that FRSC, being a public service organisation that has direct interface with the public, complaints and reports of such nature are bound to come up on a daily basis.
“With a workforce that has registered its  presence in all the states of the federation, the Corps of course receives complaints, but what matters is what we do with those reports.
‘Whether or not we are proactive in changing the negative reports is what should matter. I must also add that as an organisation that had maintained ISO certification since 2007, such reports have over the years formed inputs.
READ ALSO:https://brandpowerng.com/farmers-association-calls-for-task-force-on-food-security/
“This however determine part of the policy focus of the Corps and it has helped us in the realisation of our organisational mandate, ” he said.
Kazeem said that such reports helped the Corps in policy formulation, adding that part of these efforts included the continued administration of the regulations on maintenance of discipline.
He added that series of collaborations with Akin Fadeyi Foundation through the creation of the Flag-It, an anti-corruption Application available for the public to report such negative issues, has helped.
“We have also collaborated with the DSS and the ICPC to ensure sanity on patrol points across the country.
“Our transparency and ease of doing business has earned the Corps several commendations from the SERVICOM Office at the Presidency.
“This goes to say without any reservations that the Corps is one of the most transparent government agencies that has maintained high level of transparency and continual fight against corruption in the work place, “he said.
(NAN)
Sign in
Welcome! Log into your account
Forgot your password? Get help
Password recovery
Recover your password
A password will be e-mailed to you.