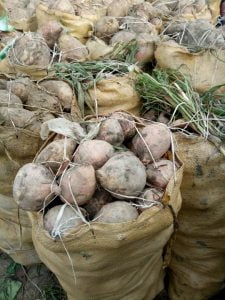 The Sweet Potato Forum has appealed to government and organised private sector to strengthen farming, marketing and processing of Orange Flesh Sweet Potatoes (OFSP) to lessen reliance on wheat, and attract investment across the value chain.

Dr Abdulkadir Hassan, President, Sweet Potato Forum, told News Agency of Nigeria (NAN) in Zaria on Monday that the Forum was a Pan African Platform for the promotion of opportunities across sweet potato value chain.

OFSP is very rich in fibre, beta carotene, vitamin A, vitamin C, vitamin B6, minerals and phenolic compounds amongst others.

Hassan said OFSP was very rich in over 12 essential nutrients used in boosting the immune system and management of ailments such as diabetes, hypertension, infertility and stress related ailments.

He said adequate investment in OFSP value chain could help the country to minimise over reliance on wheat in the production of bread and confectioneries.

According to him, OFSP can be used to produce a wide range of products such as pastries, biscuits, chips, crisps, pickles, juice, soup, stew, herbs and cosmetics.

“The leaves can be used as vegetables in making soup, salad, healthy drinks and can also be processed as rich-nutrients tea.

“Beside bread and confectionaries, the commodity can be used in the production of dying materials, coloring agents; it can also be used as active and non-active ingredients in food and pharmaceutical value chains,’’ he said.

Hassan explained that OFSP bread, biscuits and snacks could be made through its puree which made bakers to save over 25 per cent of the cost of producing conventional wheat bread

He added that few facilities in Abuja, Lagos and Nnewi were currently producing potato bread stressing that in most cases, one had to make a booking ahead of time before obtaining such bread due to high demand.

He, however, lamented that in spite of its health, economic and nutritional benefits, the crop was yet to be widely cultivated in farms.

He added that currently the global average yield per hectare was 13 tons, but in Nigeria, the yield was averaged between six and seven tons per hectare.

He, however, said the forum conducted a pilot scheme in Jigawa, Kaduna and Niger states where farmers realised between 30 to 50 tons per hectare.

He said many farmers cultivating a hectare of the potato earned up to N2m or even higher per hectare per cycle in the pilot states as the crop could be cultivated up to three times per year.

The president said developing the OFSP value chain might attract foreign investment and enhance FOREX in the  range of hundreds of millions of dollars, across all the segments of the value chain.

“The demand for the orange flesh potatoes is still very high and we still have some processing plants across the country complaining over inadequate production of the commodity in Nigeria.

According to him, the forum is into strategic partnership with key players in the sector with a view to enhance OFSP production in Nigeria.

He, therefore, appealed to the government to include OFSP into the school feeding programme and other social intervention programmes as obtained in Ghana, Rwanda and other African countries.

He said inclusion of OFSP in social intervention offered multiple benefits such as access to adequate and quality nutrition for healthy life, stimulation of grassroots economy and poverty reduction.

Bank failure: Depositors can go sleep, no deposit will be lost...

29/11/2022 0
The Nigeria Deposit Insurance Corporation (NDIC) has assured bank depositors of the safety of their monies in banks even in the unlikely event of...

2023: “Your allegiance is to Nigerians”, INEC Chairman reminds staff

PDP targets one million votes for Atiku/Okowa ticket in Anambra

Gov. Chukwuma Soludo of Anambra has charged the state...

The Nigerian Export Promotion Council (NEPC) has called on...