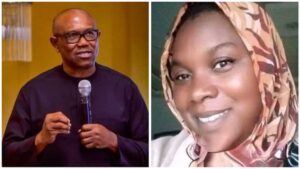 The Women in Politics Forum, has condemned the killing of Mrs Victoria Chindex, the Labour Party’s Women Leader in Kaduna State.

Mrs Ebere Ifendu, the President of the forum made the condemnation in a statement issued on Thursday in Abuja.

Ifendu who called for a thorough investigation said that the killers must be apprehended and brought to justice.

“It was reported that gunmen stormed her residence at night on Nov. 28 and shot her while her husband sustained gunshot injuries on his leg.

“ The forum demands that the killers be apprehended and brought to justice as soon as possible.

“Measures should be taken by the Nigeria Police and other security agencies to make sure that such acts are not repeated,” she said.

Ifendu said that there was need to address the culture of impunity that encourages all forms of abuse against women.

She said the unfortunate incident and others in recent times point to the way security agencies manage the country’s security situation.

“There has been an increase in various forms of violence against women in politics ranging from assassination, hate speech, blackmail, intimidation, cyber bulling, physical assault among others.

“This is a deliberate attempt to discourage women’s active participation and seeks to determine, delay or otherwise influence engagement in the electoral Process.

“Nigerian women will not accept this ugly trend and demand that women and indeed everyone should be protected from violence,” she said

Ifendu said that it was the political right of women to take part in the governance of the country directly or indirectly.

She implored Nigerian women not to be intimidated and shaken by the murder of the LP women leader, but to stand firm to ensure that their voices were heard.

The president  called on women, youth and Persons with Disabilities (PWDs) to exercise their franchise at the polls without fear, biases or intimidation.

Ifendu advised these groups of persons against selling their votes and mortgaging their future and those of their children for material items.

She urged them to use their Permanent Voters Card (PVCs) to wisely vote for the suitable and credible candidates.

Ifendu called on security agencies to be at alert and ensure the safety of women in politics, before, during and after the 2023 elections.

She called for instant prosecution of any form of violence against women in politics and by extension women in general during the electioneering period.

“Security agencies need to assure women in politics and Nigerian women as a whole of their safety in the pre and post 2023 Elections.

“We demand that all perpetrators of violence are arrested and adequately punished according to the law to serve as deterrent to others.

“Security agencies should be more proactive to curb political killings,” she said.

She called for a more united and gender acceptable political atmosphere to encourage active women participation in politics.