According to him, the Mediterranean Sea region includes 22 countries on three continents, many of which rely on cereal imports from Ukraine to feed their population. 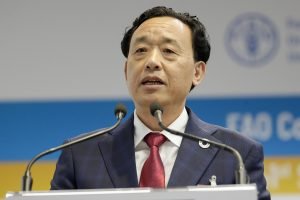 Director-General of the UN Food and Agriculture Organisation  (FAO) Qu Dongyu has urged countries not to slap restrictions on the export of foodstuffs that are in such short supply elsewhere.

The FAO chief, who made the appeal on Wednesday, said as part of the ongoing international efforts to address growing concerns over global food security linked to the war in Ukraine, food exports must keep flowing.

The top UN official said food insecurity and high prices could become a trigger for instability.

Addressing the “Mediterranean Dialogue on Food Crisis” in Rome, Qu insisted that “we must keep the global food trade system open and ensure that agri-food exports are not restricted or taxed”.

According to him, the Mediterranean Sea region includes 22 countries on three continents, many of which rely on cereal imports from Ukraine to feed their population.

“Most countries in the region had shown an increasing food import trend to meet domestic consumption needs even prior to the war in Ukraine.

“Today, the current global situation is very complicated,“ Qu said in the light of the war in Ukraine that has cut off exports of millions of tonnes of wheat, cereals and vegetable oil from the country’s Black Sea ports since the Russian invasion on Feb. 24.

The war has also prompted targeted international sanctions on Russia that have in turn hampered the distribution of its own substantial agricultural output and fertilisers – which farmers rely on around the world.

To counter these challenges, countries in the Mediterranean should work together to mitigate food security risks, he urged the delegates.

“The increase in energy and fertiliser prices is putting at risk the next harvest globally,” the FAO top official insisted.

He added that the lack of access to fertiliser and fuel represented “a particular risk for countries where low natural soil fertility means that chemical fertiliser is often essential for food production”.

That message was echoed by Italy’s Minister of Foreign Affairs, Luigi Di Maio, and Germany’s Svenja Schulze, Minister for Economic Cooperation and Development, who warned that the world was facing “the worst food crisis in decades”.

Latest data from FAO’s Food Price Index – which reached an all-time high in March and which has remained at elevated levels – have confirmed the difficulties that developing countries face in particular in providing for their people.