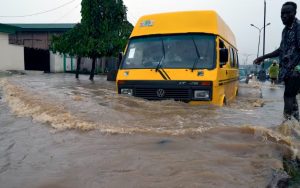 The Federal Roads Maintenance Agency (FERMA) on Sunday appealed to residents of Ikorodu in Lagos State to desist from the habit of drains stuffing, frustrating government’s efforts in combating flooding on the axis.

Mr Tunde Adepoju, FERMA’s Engineer (FRME) in charge of Lagos East, made the call in a telephone interview with the News Agency of Nigeria (NAN).

Adepoju said that drain- cleaning efforts were not yielding the desired results of combating flood across the state because drainage systems were usually stuffed almost immediately after evacuation, to compound flooding.

“We keep on educating people not to put waste or debris inside drains that have been constructed.

“Before the rainy season some of those drains were cleared, when you go there now you will see that all those things are messed up.

“And with the little resources that the agency has, it is not something that we can make people to be clearing every day,’’ he said.

He explained that FERMA had unveiled a public works team which cleared the drains in March, April and May, adding that the programme was supervised from the agency’s headquarters with spread across the nation.

He lamented that people had also built houses across coastal planes, thereby inhibiting flow of flood waters to the right outfalls originally constructed for them.

“Most of the cross falls, that is areas where water enters lagoon; when you get there, they have built houses; every single day they are reclaiming land, both Gbagada, both Ifako, all those areas.

“So we are having problem in rate of movement of water from the mainland even to the lagoon because all those sections are mostly built up now, that is number one.

“ Two, we need to educate ourselves, Nigeria can only be built by Nigerians; when we are driving on the wheels, the bottle water, we drop it on the main road, when we finish eating corn, we drop it, all these things have impact on the community,’’ he said.

Adepoju called on communities to support government efforts in drains evacuation and curbing the menace of road abuse for overall quality durable infrastructure for benefit of all Nigerians.

Speaking on the Ikorodu-Itoiki Road in deplorable condition, he said two contractors, Ahram Global Resort Ltd and Continental Resort Nigeria Ltd, were currently working on repairs of the highway.

The engineer assured residents that the few days absence of contractors noticed on site was due to the heavy rainfalls, saying that with clemency of weather, the contractors would continue work.

He listed sections that were recently rehabilitated on the axis to include Lucky Fibre section, Ijede Junction and Parafa portions, adding that all other critical sections had been stabilised with boulders.

“These two contractors reported at the beginning of the rain and most of the palliative work done there, they were the ones that did it. The problem they are having is we can’t do asphalt work during rainy season, it’s a waste of resources.

“That is the reason why they are not on site; those two contractors are supposed to be immediately after Parafa, they are supposed to fix the place towards Maya but they were not on site because of the continuous rain witnessed in the past weeks, but before the rain started, they put some big stones which we call boulders,’’ he said.

He said the highway had out lived its designed life and needed total reconstruction, adding that, FERMA would continually maintain the road pending award of contract for its reconstruction.