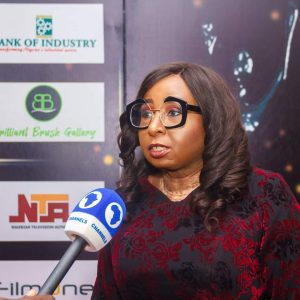 Beneficiaries of free movie production training in a partnership between the Lagos State Government and Africa Film Academy (AFA) have been exposed to the best industry standards.

The News Agency of Nigeria (NAN) reports that the training is on acting, art directing, light and lighting, sound production, cinematography and was designed to further enhance talents in the creative industry.

Peace Anyiam-Osigwe, Chief Executive Officer of AFA, who disclosed this in an interview with NAN in Lagos on Monday, said no fewer than 600 beneficiaries have been trained so far.

She said that the training was aimed at providing needed skills to the youths as well as putting in in the best frame of mind to exploit the various opportunities in the industry.

She said that youths from Alimosho (308); Badagry (204) and Epe (202) have been participating, adding that one of the divisions was engaged in the production of a short film.

”The short film titled ”Akanji” was a project currently been executed by beneficiaries in Alimosho Local Government. It showcases the daily experiences of children living in area.

”We hope the film will be premiered soon, like every other film.”

She noted that this was done to enable the beneficiaries practise all they have learnt in the course of the training in order to boost their confidence in independent movie production.

”The shooting process is the practical aspect of the training; to be sure they can produce movies on their own. The choice of “Akanji” production was to keep history alive,” she said.

Anyiam-Osigwe disclosed that there were plans to extend the training to the remaining two divisions of the state by 2023.

The training on movie production began in June.