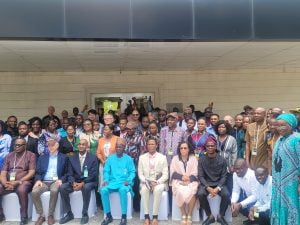 The Permanent Secretary, Federal Ministry of Agriculture and Rural Development (FMARD), Dr Ernest Umakhihe has urged scientists and other stakeholders in the cassava value chain to improve on more varieties.

Umakhihe made the call at the Annual Meeting of NextGen Cassava Project in Abuja on Tuesday.

He who was represented by Dr Raji Bamidele, Deputy Director, Roots and Tuber Division in the ministry.

Umakhihe said there was a need for concerted efforts by stakeholders, to facilitate how genetic improvement of cassava could realise its potential yield level in Nigeria.

He said the interaction between the national cassava research scientists and specialists from other continents, would contribute immensely in addressing the challenges facing the cassava sub-sector.

He said the Buhari administration would continue to drive the economic diversification agenda from crude oil to agriculture.

“The sector has continued to gain prominence as shown in its continuous contribution to the nation’s Gross Domestic Product (GDP).

“Between April and June, agriculture has contributed 23.2 per cent of the total GDP, in spite challenges such as flood, climate change and other natural disasters, insecurity, banditry and kidnapping among others,“he said.

“We will continue to partner with Bill and Melinda Gates Foundation and other partners and stakeholders in the cassava value chain for farmers to get the best seeds,“he said.

He, however, commended the Federal Government of Nigeria for hosting IITA in Abuja since 1991.

“Cassava is one of the most important root crops which contribute significantly to the livelihood of millions of people in Sub Saharan Africa.

“It plays important roles for the supply of carbohydrates and vitamins, which in most cases serves as substitute,”he said.

Aladele said the meeting will help envision what is in the pipeline for future cassava improvement for food security and industrial uses.

He, however, appealed to other scientists to take a cue from the modern techniques been deployed by NextGen to fast track crop improvement.