She said her ministry was leveraging a multilayer data mining effort to recover huge debts owed the Federal Government by various Ministries MDAs. 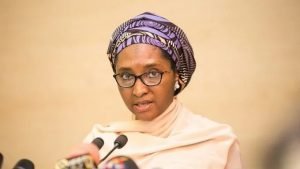 The Federal Government has recovered N53.5 billion out of N5.2 trillion from its Ministries, Departments and Agencies (MDAs).

The Minister of Finance, Budget and National Planning, Mrs Zainab Ahmed, made the statement at the formal launch of Project Lighthouse Debt Analytics and Reporting Platform in Abuja on Monday.

She said her ministry was leveraging a multilayer data mining effort to recover huge debts owed the Federal Government by various Ministries MDAs.

Ahmed said through the consolidation efforts of the project, the government had been able to aggregate monumental debts of approximately N5.2 trillion owed by MDAs, out of which N53.5 billion had been recovered in the last 12-18 months.

She said the Project Lighthouse is an initiative which entails using advanced data mining and analytics techniques to identify tax defaulters, establish their tax liabilities and send notifications to appropriate authorities for necessary actions.

Ahmed said that the figures came up from data aggregated from over 5,000 debtors across 10 MDAs.

“Working in collaboration with the Office of the Accountant General of the Federation (OAGF), we have been able to recover the sum of N53.5 billion within the last 12-18 months, through the Government Integrated Financial Management Information System (GIFMIS) as a recovery touch point.

“To consolidate on the current effort of this project, a Debt Recovery Application has been built to be monitored by the new Debt Recovery Unit.

“The Debt Recovery Unit will capitalise on the effort made by the project consultants to provide the government with up-to-date records into its credit status.

“By harmonising debt records across all MDAs within the country, give debtors access to a platform to view and offset debt in a seamless and secured manner as well as strengthen the institutional framework for enforcement and management of the Federal Debt Recovery plan,” she said.

The minister tasked all Federal Government-Owned Enterprises (FGOEs) and MDAs to update their list of debtors on a month-on-month basis in line with the Project Lighthouse debt recovery portfolio.

Ahmed said that this would also encompass the development of an institutional framework for enforcement, recovery and management of the fiscal environment.

She said  that one of the key economic policy objectives of the current administration, as contained in the Economic Recovery and Growth Plan (ERGP), was improving overall Federal Government revenues by targeting and increasing revenues from non-oil revenue sources.

“ERGP also aims, among other goals, to increase the tax base by drastically increasing the Company Income Tax and Value Added Tax compliance, bringing additional taxpayers into the tax net, and increase Tax to GDP ratio.

“You will recall that in the last few months, major steps have been taken to improve the fiscal position of Government, one of such steps is the implementation of quite a number of portfolio initiatives under the Strategic Revenue Growth Initiatives (SRGI), which some of you have been participating in,”  Ahmed said.

The minister, however, regretted that in spite of being in a technology and data-centric world, Nigeria had no culture of using data and information to guide the formulation, implementation and impact assessment of its initiatives and policies.

“This modus operandi presents a number of challenges, firstly, our policies are not usually empirically based. Second, we are not able to effectively track the implementation and impact of these policies, initiatives, programmes and mandate. Third, we lack data to help guide the revision or optimization of these policies.

“In response to the aforementioned challenges, the Federal Ministry of Finance initiated “Project Lighthouse”. In July 2017 during the first Phase of Project Lighthouse, data was mined from multiple sources to support the implementation of the Voluntary Assets and Income Declaration Scheme (VAIDS).

“All these data helped us to identify and better profile individuals and corporate taxpayers, it also helped to identify tax defaulters and potential beneficiaries of VAIDS.

“This exercise raised awareness about VAIDS, it increased the level of responses we got, helped us to know more about taxpayers, their assets and income sources that were hitherto unknown to government and tax authorities.

“A perfunctory review of perceived significant leakages in Government led the FMFBNP to issue a directive on Sept. 26,  2019, to all government agencies in a bid to aggregate all government debts across all MDAs with a view to having a single window on the credit profile of government,” Ahmed said.

She said that more efficient revenue mobilisation and blocking of leakages would provide more funds to deliver on the needs of the country.

“A growing economy, focusing on the areas where we have comparative advantage, with a strong focus on infrastructure and improved ease of doing business, is a clear recipe for growth, profit and progress.

“I will be the first to admit that more efforts are needed in this direction.

“I am convinced that the structures this administration has put in place will in no distant time revolutionise fiscal policy in the country and anchor a robust economic growth,” she said.

The Chairman, Carter Consulting, Mrs Nana Mede, said that the platform was to aggregate all debtors and people who are indebted to the government.

She therefore said that with the level of progress seen so far, more supports were needed from the MDAs.