Agba said that the intervention by the Qatar Charity Organisation was in the social housing complex for orphans and the less privileged members of the community, located at Wassa FCT, Abuja. 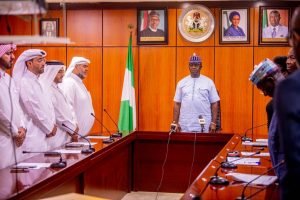 The Federal Government has signed a cooperation agreement with Qatar Charity Organisation to build a social housing complex for orphans  and the less privileged in the Federal Capital Territory (FCT).

The agreement was signed by the Minister of State, Budget and National planning, Prince Clem Agba, on behalf of the Federal Government in Abuja on Wednesday.

Agba said that the intervention by the Qatar Charity Organisation was in the social housing complex for orphans and the less privileged members of the community, located at Wassa FCT, Abuja.

“Qatar Charity Organisation built a housing complex for the less privileged  persons, who are victims of insurgencies in Sokoto State,

“The organisation also drilled 900 units of boreholes across the North East, North West and South West of the country,” Agba said.

He said that the interventions were in tandem with National Development Plan (NDP) 2021 to 2025, which was developed to succeed the Economic Recovery and Growth Plan (ERGP) 2017 to 2020.

The minister said it would promote economic and socio-cultural development of the citizens in the areas of education, economic empowerment, employment, shelter for orphans, water and sanitation.

Agba said that the agreement signed was sequel to the permit issued to the organisation by the ministry to operate as an International Non-Governmental Organisation (INGO).

He said that they were to carry out humanitarian, technical and other development activities under the supervision of the Embassy of Qatar in Nigeria.

“I wish to commend the organisation for the laudable interventions and implore them to extend their kind gesture to other states and communities that have not benefited from their programmes and projects.

“ I also wish to extend the appreciation of the Federal Government to Qatar for the step being taken to advance the bilateral ties between our two countries through economic growth and development ,” Agba said.

The Chairman and CEO of Qatar Charity Organisation, Yousif Al-kawari, commended the Federal Government for the constant support which they had received from it so far.