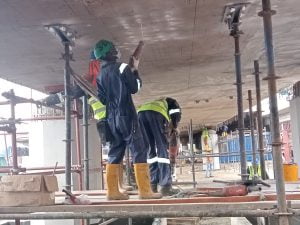 The Federal and Lagos State Governments on Thursday pledged concerted action to evict traders and illegal occupants under Lagos bridges.
Declaring zero tolerance to abuse of bridges, they hinged the action on the need to save lives and protect the infrastructure.
The Minister of Works and Housing, Mr Babatunde Fashola, and officials of the Lagos State Government briefed journalists on their position after inspecting Apongbon and Eko bridges in Lagos.
The Lagos State officials were led by the Deputy Governor, Dr Obafemi Hamzat and the Special Adviser to Gov. Babajide Sanwo-Olu on Works and Infrastructure, Mrs Aramide Adeyoye.
Fashola said efforts to quickly complete initial emergency rehabilitation on Eko Bridge were slowed down when Apongbon Bridge was affected by fire in March.
He said construction materials imported for completion of Eko Bridge were deployed to begin urgent repairs on Apongbon.
The minister said that efforts to complete Apongbon before Christmas had also been frustrated by another fire that affected the Ijora Olopa section of Eko Bridge on Nov. 4.
He said the government would not be able to actualise its plan of completing Apongbon Bridge because its materials had been deployed to the burnt section of Eko Bridge.
“There will not be Apongbon for Christmas, as much as we tried,” Fashola said.
He joined the contractor on the project to give technical details of how casings and other components were being used for rehabilitation on both bridges.
The minister lamented the hardship faced by road users.
“That is what happens every time you burn the bridge. It is collective pain, I use the bridge too,” he said.
Fashola said the fire incidents were due to illegal activities of a few residents, which could lead to collapse of the bridge, posing threat to lives.
He said that the decision to shut the Ijora Olopa section of Eko Bridge pending integrity tests was a painful one.
The minister said it was, however, to avert a gory situation where a bridge weakened by fire would collapse and lead to loss of lives.
He said the delivery date of Apongbon bridge, earlier fixed for December 2022, had been extended to May 2023 because of the emergency repair of Ijora Olopa section.
Lagos State Deputy Governor, Dr Obafemi Hamzat, said quick action would be taken against illegal occupants under the Eko bridge.
This, he said, was due to the hardship their activities had inflicted on commutters as a result of closure of the bridge.
The Lagos State Commissioner for Transportation, Dr Frederick Oladehinde, said the state and federal traffic regulatory agencies would collaborate towards managing traffic and diversion points.
He also explained the traffic management architecture and how motorists could navigate due to maintenance work on both bridges.
Special Adviser to Gov. Babajide Sanwo-Olu on Works and Infrastructure, Mrs Aramide Adeyoye, said that repairs had been carried out on Herbert Macaulay Way, one of the routes for traffic diversion, to ease gridlock.
Mr George Mohanna, Director of Construction, Buildwell Plants and Equipment Industries Ltd, the project contractors, explained the  Ijora Olopa and Apongbon reinforcements and repairs.
The Director, Highways, Bridges and Design, Mr Oluropo Oyetade, said Eko Bridge, built in 1969, first underwent maintenance in 1975 when it was upgraded.
He said it did not undergo any other maintenance until 2021.
This, he said, was followed by that of 2022 where over one hundred damaged bearings and expansion joints were being changed.
Oyetade noted  that recalcitrant occupants and traders did not keep the promise they made to the minister when they pleaded to be given one month extension after expiration of the ultimatum given them to leave.
Earlier, during inspection of Ijora Olopa Section of Eko Bridge, the director said integrity tests on the infrastructure would begin on Friday, Nov. 11.
Editor’s Picks  China hands over N2.8bn agric project to Nigeria