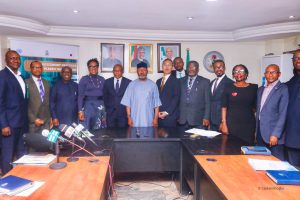 The Minister of Environment, Mr Mohammed Abdullahi, who inaugurated the committee in Abuja, said that the establishment of the committee was to provide technical assistance and guidance for effective implementation of the project.

Abdullahi said the inauguration took off at a time attention of global community was focused on negotiating establishment of a legally-binding instrument for environmentally-sound management of plastic throughout entire lifecycle.

According to him, “as you are all aware, misuse of plastic and poor management of its waste pose danger to human health and the environment.

“Such poor management leach toxic chemical constituents such as endocrine disrupting chemicals which have been linked to infertility, diabetes, prostrate/breast cancer, foods, drinks and the environment.

“Also, tonnes of improperly disposed plastic wastes litter our streets; clog up drainages in rural and urban areas, leading to flooding incidents as experienced in certain parts of the country recently.

“These have contaminated the soil, thereby, affecting farmlands and livestocks, littering the oceans and threatening biodiversity and increase greenhouse gas emissions when burnt indiscriminately,’’ he said.

Abdullahi said that it was in response to these challenges that the ministry, in collaboration with relevant stakeholders, took steps to address the plastic issue holistically by adopting circular economy model.

He said that the ministry and the stakeholders have developed the national policies on solid waste and plastic waste management to promote environmental protection, resource and energy efficiency, circular economy practices.

He said that the effort has supported in enhancing the conservation of natural resources through sustainable production, consumption and currently implementing community-based waste management projects with emphasis on recycling.

The minister noted that Japan funded a study on available sustainable alternative materials for plastic, innovative packaging and recycling technologies.

He said that the alternative materials would meet market needs in Africa to reduce plastic leakages to the environment in Nigeria.

“The study which was conducted in 2021, implemented by United Nations Industrial Development Organisation (UNIDO), in collaboration with the ministry, revealed low level of recycling activities in the country.

“It also revealed that only 45 per cent of wastes are collected, 80 per cent of plastic waste goes to dumpsite while only 10 per cent is recycled.

“It is against this backdrop that this project was developed to address these gaps,’’ he said.

The Country Representative and Regional Director for West Africa, UNIDO, Mr Jean Bakole, said that plastic litter is a major environmental problem in the country.

Bakole said that the production was drastically increased by more than twenty-folds between 1964 and 2015, with an annual output of 322 million metric tonnes.

He said that the figure is expected to double by 2035 and quadruple by 2050, if no global action is taken.

He said that despite the increase in plastic waste generation, Nigeria has continued to display a leadership position in Africa by developing various initiatives and partnerships at combating plastics and solid wastes pollution.

Bakole, however, reaffirmed UNIDO’s commitment to working with the government through the ministry and other stakeholders, towards achieving an inclusive and sustainable industrial development without compromising the quality of the environment.

The Japanese Ambassador to Nigeria, Mr Matsunaga Kazuyoshi, said that the committee is to oversee the plastic circular economy project through monitoring the project’s implementation progress.

Kazuyoshi said that the committee would also validate its overall direction and the work plan, and assist in mobilising resources required for project implementation where necessary.

He said that the plastic circular economy would be of use in the field of marine plastics.

The Director, Abuja Environmental Protection Board (AEPB), Mr Osilama Braimah, said that the plastic wastes generation is a major environmental problem that needs to be addressed effectively.

Braimah said that the project is expected to be integrated into effective implementation of plastic wastes management in the FCT which would strengthen plastic value chain.

He said that the effort would as well increase the recycling capacity, thereby reducing the amount of plastic leaking in the environment.