Ngige said the decision to digitise the NSITF was in line with the government’s policy on ease of doing business. 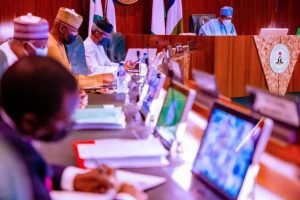 The Federal Executive Council (FEC) has approved the digitisation of the services of the National Social Insurance Trust Fund (NSITF), to be known as e-NSITF.

The Minister of Labour and Employment, Dr Chris Ngige, made this known when he briefed State House correspondents at the end of the council’s meeting on Wednesday.

The meeting was presided by President Muhammadu Buhari at the Council Chamber of the State House, Abuja.

Ngige said the decision to digitise the NSITF was in line with the government’s policy on ease of doing business.

He said: “The ministry presented two memos to the council today. The first memo was presented on behalf of our parastatal, the Nigeria Social Insurance Trust Fund (NSITF).

“As you’re aware, a lot has happened in the NSITF in terms of revenue losses and plunder of funds that have been given to that organisation.

“The NSITF implements the Employee Compensation Act ECA 2010 and by that Act, employers in both public and private sectors are supposed to pay 1% of the emoluments of their staff into a social fund in NSITF.

“And this one is to be used as a premium or insurance fund to cater for workers or staff members who have accidents, injuries, disabilities and even deaths that occur in the cause of their work.

“The Pension Act makes reference to it that it must be done for workers in addition to group life.

“So, today we brought to council a memo for an e-NSITF by which their operations will now be digitalised.

“So,  in the comfort of your office, you can pay and register on that platform and that money is now tracked into a Central pool, from where claims are made and payments are also made for the insurance of those who are beneficiaries, you also track them.’’

He also said the new strategy will enhance the efficiency of NSITF as well as block leakages.

“This is one of the things the government has done in the spirit of digitalisation of the economy and ease of doing business for everybody.

“So, this will make for efficiency and help the organisation to grow it leaps and bounds.

“Already, the organisation is revitalised, following the present restructuring agreement for them.

“Today, NSITF can pay all their salaries, they can boast of even doing capital projects. And this digitisation of funds operation is part of the capital projects that they are doing and like I said earlier, the accountability that is there will make for non-leakages of funds.

“We also know that previously, there have been complaints of claims not being paid but e-NSITF will track claims and allow people to know who and who benefits from those claims.

“So, this is one of the memos presented today. A consultant is going to handle it and the council approved that the digitalisation should be completed in eight weeks,” he added.

Also addressing the correspondents on the outcome of the meeting, the Minister of Industry, Trade and Investment, Chief Niyi Adebayo, disclosed that the council approved the enactment of the Federal Produce Inspection Service Bill 2022, for onward transmission to the National Assembly for passage.

According to the minister, the proposed law is to repeal the Produce Enforcement of Standards Act 2004, which is currently in place.

Adebayo said when passed, the new law would enable the ministry to establish five laboratories across the geo-political zones of the country, for microbial analysis of agro products for local consumption and export.

“The justification for the memo is primarily of the need to have an all-encompassing produce inspection regime in Nigeria that is capable of ensuring best practices in the export of produce from Nigeria.

“The proposed bill seeks to correct the shortcomings in the previous law. For instance, the organisational structure to which the law applies, which has increased to 72 from 16, the location covered by emergency orders for pest control use in the event of an outbreak.

“The old law covered only Lagos but now the new bill will cover the whole country.

“The new law also makes provision for establishment of laboratories in five geo-political zones in the country in addition to the one that presently exists in Lagos for microbial analysis of agro produce, for local consumption and for export,’’ he said.

According to the minister, the whole essence of the new bill is to bring the practice of inspection of foodstuff to improve it to current global practices.

He further explained that the original law was enacted in 1950, saying however, it was renewed in 2004.

“We believe that it is time for it to be brought up to date and that is what we have done and the council approved it.

“The vouncil directed that the Attorney General and Minister of Justice transmit it to the National Assembly.”