She said that the reduction in berthing and complaint time had helped in enhancing the ease of doing business, as well as ensure efficiency in the seaport. 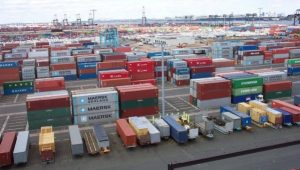 The Nigerian Ports Process Manual (NPPM) has received accolades for reducing vessel berthing time at the seaports from five hours to 90 minutes.

Dr Madgalene Ajani, Permanent Secretary, Federal Ministry of Transportation, gave the commendation at the flag-off of the Operation Free the Port Corridor organised by the Port Standing Task Team on Thursday

The Port Standing Task Team is a committee under the Nigerian Shippers’ Council (NSC).

Ajani also noted that the time used in resolving importers complaints had reduced from 10 days to four hours.

She said that the reduction in berthing and complaint time had helped in enhancing the ease of doing business, as well as ensure efficiency in the seaport.

“However, to free the port corridor, it must be done holistically and with the support of other agencies and that treatment is what we are trying to achieve.

“The aim of this holistic achievement is for us to achieve ease of doing business in Nigeria ports and the corridors.

“So, all of us here need to agree that we can do this and to be able to achieve this, we need to have a Standard Operating Procedure (SOP), that we need to follow.

“The SOP is not conscripting everybody to follow one person’s SOP. It  puts into cognisance, the SOP of all operating agencies in the port and everybody’s SOP will be put into focus,” he said.

She commended the Presidential Standing Committee on what had been achieved in the last one year, noting that it could not have been done without everybody’s contribution.

Mr Emmanuel Jime, Executive Secretary, Nigerian Shippers’ Council (NSC), said the task team was set up for the purpose of removing illegal checkpoints and shanties along the Ports’ Corridors.

He said that the exercise being flagged-off tagged “Operation Free the Ports’ Corridors” was apt.

“Indeed, the ports’ corridors are not free; the traffic does not have free flow, the shanties are not freeing spaces for conducive business environment.

“Also the unnecessary checkpoints obviously do not make for an atmosphere free of extortion and other forms of corrupt practices.

“This exercise is going to be the third in the series of activities of the task team since its inception in March, 2021, which began its monitoring and enforcement mandate at the Joint Boarding of vessels operations.

“There, they ensured adherence to the provisions of the Nigerian Port Process Manual (NPPM).

“Following the success of the first phase, the team moved to the terminals in its second phase of activities to ensure a new culture of Joint Cargo Examination in compliance with the NPPM to foster global best practices,” he said.

“Today marks the implementation of the third phase as  we embark on sanitising the ports corridors.”

He assured everyone on behalf of the task team that operations of the team would be conducted without undermining the provisions of any agency’s SOP and or Act.

“For extortion, it takes two to tangle. We should understand that those extorting are not sane people, they are people willing to stand anything even the sight of guns and they have people backing them.

“Apapa corridor can be controlled but the TinCan corridor calls for national concern as the checkpoints are too much, ” she said.

He said that the engagement ensured the reduction of vessel berthing time from five hours to 90 minutes and resolving of dispute from ten days to four hours.

“However, despite all these proactive moves to clear containers, these cargoes, when they move out of the port, what becomes of them?

“From our surveillance, We have observed that from the Apapa port to Sifax Ijora, less than two kilometre, we have 26 checkpoints and this needs to be removed.

“And that’s why we have all the stakeholders including the freight forwarders, come to say with one voice that this is a done deal,” he said.