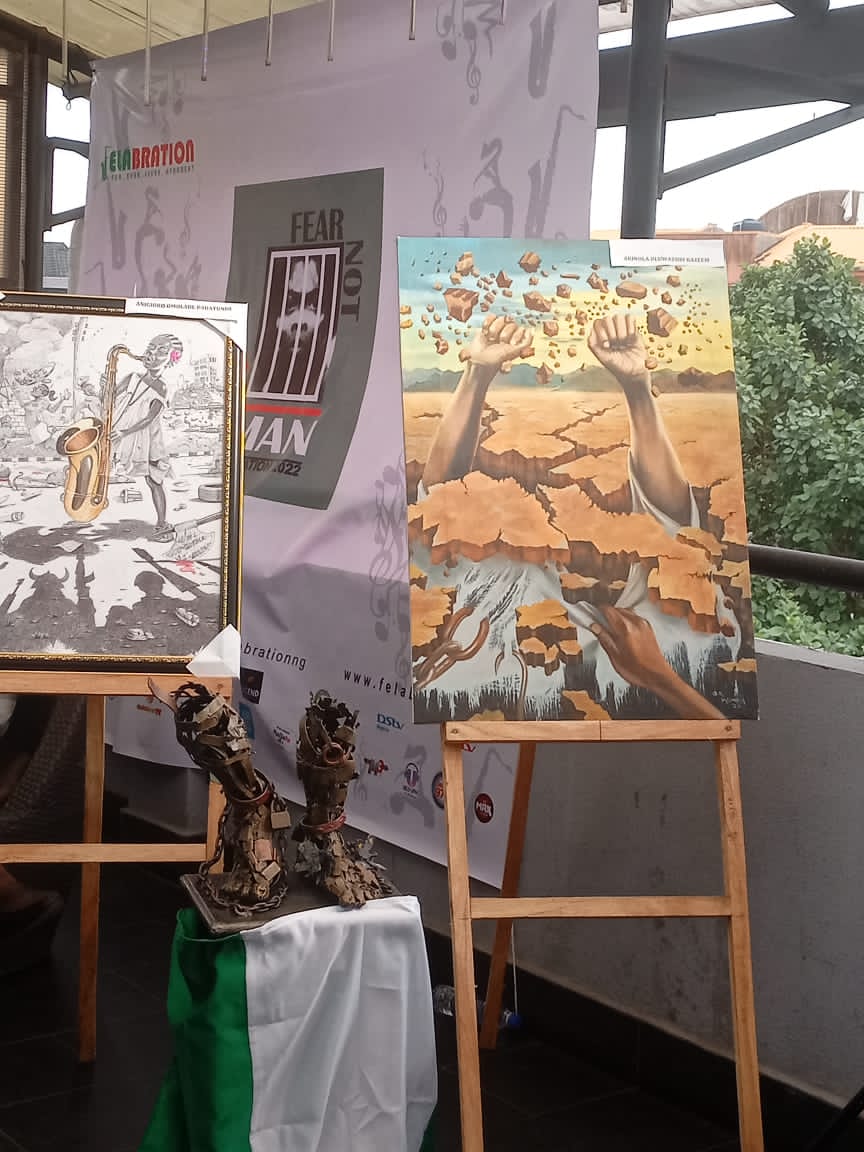 A Nigerian Artist, Babatunde Anigioro, has emerged the winner of the 2022 Felabration Artwork competition.

The News Agency of Nigeria (NAN) reports that the winner was announced after 55 different artworks competed fiercely for the winning prize at the competition which held at Kalakuta Museum at Ikeja, Lagos on Friday.

Uzoma Vincent’s sculpture entitled ‘Freedom’ emerged as the runner-up with a token of N250,000 while Oluwatomi Kazeem’s ‘Despite All Odds’ came third and was rewarded with the sum of N150,000.

NAN also reports that Felabration is an annual festival of music and arts commemorating the life and times of the late Fela Anikulapo-Kuti, popularly known as Fela.

It is also a month-long music and lifestyle festival in honour of the legacies of Fela, who is the Afrobeat progenitor, and legendary musician.

In its sixth year and with the theme ‘Fear Not 4 Man”,  the renowned Judges Sarah Boulos, Prince Yemisi Shyllon, and Mufu Onifade, carefully rated the works of various artists from around the world who competed to win the coveted prize money, fame, and honour.

The judges took turns to express their views on the competition while commending the increased turnout of submissions.

Speaking, Boulos, a Lebanese and Founder of the Society for Performing Arts in Nigeria, said she was moved by all the artworks, while noting that compared to previous years, it was becoming more discerning to fall in love with one art than the other.

On his part, Onifade, a thespian and art curator, said the artworks had great aesthetic values but only a few followed the theme in their works.

“I take a general outlook of all the 55 works and one thing that stands all of them out except one is that they are rich in aesthetics, they have the quality that made them qualify but many of them are lacking in the area of theme and that’s why we are here as judges.

“The area that carries the larger mark is the theme but any work that wins is definitely rich in content,” he said.

Similarly, Shyllon, an Art Collector and founder Yemisi Shyllon Museum of Art at Pan-Atlantic University, explained the elements which the judges used while giving marks to the artists.

“We have found improvement on the quality of works by the artists and have indicated clearly how Felabration has become popular with many artists getting involved.

“The work that won has all the ingredients of creativity, and originality and has the theme because Fela’s life is what we are trying to portray with the competition.

“He’s very relevant today and for a very long time to come, his ideology will continue to soar,” he said.

Others are: Samuel Kayode’s ‘Silent Noise’, Tolu Pencilz’s painting of ‘Aproko Doctor’ and Variety Brown’s painting of Fela all elicited discussion among the judges.

Some other artists works that competed include Gbadamosi Ebenezer with ‘Other Side’, Oyelakin Emmanuel with ‘Violinist,’ and Obinwu Esther with ‘Dark and Beautiful’.

Speaking, the runners-up, Vincent and Kazeem, lauded the organisers of Felabration for the opportunity given them to showcase their talents.

Present at the event are Yeni Kuti and Made Kuti, (daughter and granddaughter of Fela).