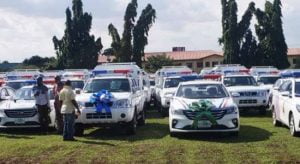 The Federal Executive Council (FEC) has approved N8.3 billion for the purchase of operational vehicles and equipment for the Nigeria Police Force.

“Today, the Federal Executive Council approved for the Nigeria Police Trust Fund (NPTF) to award contracts for the supply of 82 operational vehicles, Toyota brand, for the efficient operation of Nigeria Police at the total cost of N2.2 billion.

“We also had approval for supply of customised police raincoat for distribution to police across the country at the cost of N1.9 billion.

“There is also the supply of drugs and medical equipment for police hospitals across the country at the cost of N2 billion; when you add all these projects, they will come up to N8.3 billion,’’ he said.

The minister explained that the NPTF was set up as a special intervention fund to facilitate the improvement of the operations of Nigeria Police Force in the areas of equipment, training and welfare.

On his part, the Minister of Power, Mr Abubakar Aliyu, said he presented three items to the council.

He said that the first was a note to council on the ongoing projects.

“The second one is a request for approval of a contract to supply and install emergency restoration system or 330KV and 132KV transmission line for ongoing rehabilitation works in Lagos at the sum of 968,000 dollars as the offshore component; the onshore component is N7.4 million.

“So, it is only affecting the onshore component due to escalation of construction materials within; and the sum is N445.3 million, and the subsisting contract amount as I told you the offshore is not affected.

“The onshore, which was N939.4 million, has now moved to N1.9 billion and the council graciously approved,’’ he said.