The police stated that the situation was brought under control alongside its sister agencies, as it continued an eagle eye monitoring and surveillance amidst discrete investigation. 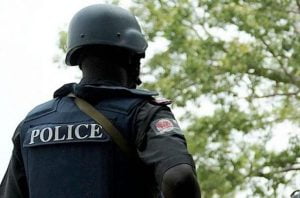 The FCT Police Command says it has swiftly arrested and restored normalcy in Dei-Dei town of Bwari Area Council, on Wednesday in Abuja following a civil unrest in the area.

This is made known in a statement, signed by the FCT Police Public Relations Officer (PPRO), DSP Josephine Adeh.

The police stated that the situation was brought under control alongside its sister agencies, as it continued an eagle eye monitoring and surveillance amidst discrete investigation.

“This followed after the outbreak of a civil unrest at Building Material market , Dei-Dei area of the FCT at about 11:30 am today.

” A comprehensive deployment of tactical and intelligence assets of the Command was led by the Commissioner of Police, CP Babaji Sunday psc, who drifted swiftly to the scene to ensure that the unrest is being nipped in the board and managed.

” This was also to forestall the destruction of private and government infrastructure, loss of lives and property and to restore normalcy to the situation.

” Consequent upon the above, the Police in a concerted effort with other state apparatus upon arrival at the scene, managed the uproar preventing further disintegration of law and order.

” In addition to the above, Police monitoring and surveillance to ascertain the cause of the outbreak of violence, sustain the relative peace restored, and affirm the resultant level of damage is ongoing.

” Findings will be communicated in due time,” it stated.

The police further urged the public to shun participating in the promulgation of unverified news about the incident, saying it was capable of reigniting the extinguished flame of violence.

The statement also urged residents to desist from any form of violence and disobedience to law and order but to remain vigilant and report any suspicious or abnormal occurrence to the Police.

The News Agency of Nigeria (NAN) reports that the popular building material market is situated along Kubwa-Zuba express way.

Earlier, an eyewitness, Mr Damian Akau, who is also a resident of the area told NAN that the unrest took place after a woman was allegedly killed in an accident.

” I was close to the market when I saw people running and screaming that a vehicle had hit a woman and she has died.

“The woman was said to have been on a bike. I don’t know how the accident happened but I saw some people holding down the commercial motorcyclist and maybe trying to beat him up.

“Before we knew what was happening, other commercial motorcyclists tried to rescue him from the mob and then a clash ensued.”

Akau said that property had been destroyed during the clash and an unverified number of persons died in the mahem.

He said that shop owners were forced to close their shops and ran for safety first, while some shops were set on fire.