He said that the organisation envisions a society where women would have their pride of place in politics and would also be accountable for every office held after elections. 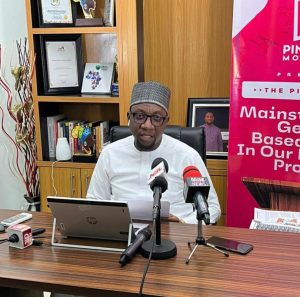 The Executive Director and Founder of the group, Mr Belema Meshack-Hart, said this on Wednesday in Abuja.

Meshack-Hart said that the group would launch a campaign under the Pink vote movement and organise debate delving on women and girl child issues.

He said that the organisation envisions a society where women would have their pride of place in politics and would also be accountable for every office held after elections.

“The Pink Debate is the first of its kind. It’s a gender-based debate that will solely focus on issues around the African woman and the girl child.

“We have identified 22 issues that will be our focal point during this debate ahead of the FCT Councils elections, which is slated to hold on Feb. 12.

According to him, the Pink Debate will broadcast live for two hours from 6pm on  Jan. 27 on Wazobia FM, reaching over one million people in the FCT.

“In addition, we have also put in place activities to reach over a 100,000 PVC carrying residents of FCT physically with fliers to participate and listen in on the debate.

“An educated girl is an educated Nation; we want to empower women and girl children. We have sent back lots of young girls to school, gender based issues are very important, our political office holders need to be held accountable after the debate,” he said.

“The expected outcomes for this activities are centered around  helping electorate make informed decisions, to increase female citizens’ access to electoral information through the Pink Vote Movement platform.

“It will create a follow up mechanism with a view to hold political office holders accountable for their promises after elections.

“We envision increased participation of women and girls with disabilities in all
governance processes to reduce voter’s  apathy,” he added.

He stated that, this will also ensure  that gender-based issues are given utmost priority by political aspirants, if elected into office.

Engage, Empower, Educate Initiative (EEEI) is a non-partisan, non-governmental organization aimed at providing platforms and information for women, girls and young people to take lead in the development of Africa