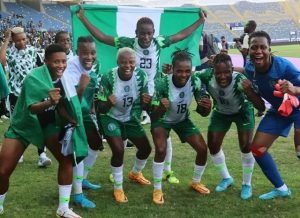 The Super Falcons failed to earn a 10th final match appearance after falling 4-5 on penalty kicks in the 2022 Women’s Africa Cup of Nations (WAFCON) semi-finals on Monday.

This was after playing out a 1-1 draw with hosts Morocco over 120 minutes in the competition’s semi-final match.

The Nigerian side were down with two players in large parts of the second half at the Moulay Abdellah Sports Complex in Rabat.

It was a day the Video Assistant Referee (VAR) was fully on show.

The Super Falcons received two red cards which ultimately helped in ending their dreams of a 10th WAFCON title.

The News Agency of Nigeria (NAN) reports that Halimatu Ayinde and Rasheedat Ajibade were sent off in the second half for two malicious tackles.

Ayinde was the first to be sent off after VAR’s intervention three minutes into the second half.

Barely 12 minutes after going down to 10 women, the Falcons broke the deadlock through an own goal by Yasmin Mrabet.

Ajibade was involved again in the build-up after she delivered a wonderful cross from the right which Ifeoma Onumonu headed off the post.

Substitute Uchenna Kanu reacted the quickest to poke home the rebound which saw her effort deflected by Mrabet into the net to put the Falcons ahead in the 62nd minute.

But the lead only lasted just four minutes before a poor error from goalkeeper Chiamaka Nnadozie gifted the Atlas Lionesses the equaliser.

Things would go from bad to worse for Nigeria when the Falcons were reduced to nine with 20 minutes to go, after another VAR intervention saw Ajibade receiving the marching orders.

The defending champions did hold their own against the Moroccans, who expectedly dominated but could not find the winner as the game went into extra time.

The Super Falcons could have scored the winner in the second half of extra-time, but substitute Gift Monday saw her superb effort from outside the penalty box rattle the post.

The hosts continued to pile on the pressure but were unable to find the much-needed goal as Nigeria held on for the penalty shootout.

Morocco emerged 5-4 victors at the end after only Onumonu failed to convert her kick.

She however was so overwhelmed with her emotions as she failed to muster a word during her post-match interview as she wept uncontrollably.

The result meant the Super Falcons will now face Zambia in the third-place playoff on Friday.

On their part, Morocco will battle South Africa in the final match at the Stade Mohammed VI in Casablanca on Saturday.