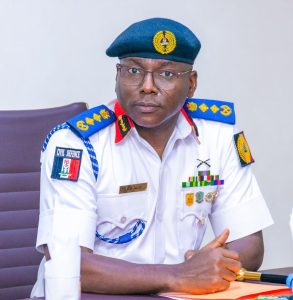 The Nigeria Security and Civil Defence Corps (NSCDC) has constituted a panel to investigate a viral video of a personnel caught allegedly extorting money from a petroleum marketer in Rivers.

This is contained in a statement by NSCDC spokesperson, Mr Olusola Odumosu, on Monday in Abuja.

The Commandant General (CG), Ahmed Audi said anyone indicted by the panel will be dealt with decisively.

The News Agency of Nigeria (NAN) reports that an NSCDC personnel was caught by a Closed-Circuit Television (CCTV) extorting money.

He also mandated it to conduct a forensic examination of the trending video, identify those captured and recommend appropriate punishment, in accordance with Public Service Rules.

The CG gave the panel one week to authenticate the video and submit its report.

“I will make scapegoat of these bad elements within the system to serve as deterrent to others like them, if what is seen in that video is correct.

“This is going to be the last time any member of this service will be involved in such heinous crime, enough is enough.

“The Corps is out here leading the fight against oil theft and illegal oil bunkering and some bad eggs within the service are out there sabotaging our efforts, giving us bad names and image,” he said.

Audi reiterated that his administration would never tolerate any act capable of jeopardising public interest and the corps’ mandate of safeguarding critical national assets and infrastructure.

“Any officer caught in violation of the Corps Standard Operating Procedure and Code of Ethics will be decisively dealt with irrespective of rank, status or nativity.

“Only last week, I read the ‘Riot Act’ to all heads of Anti-vandal unit in the Niger Delta region, this time around, I will make sure that anyone dragging our name in the mud is shown the way out,” he said.

Audi reaffirmed the Corps’ commitment to saving the nation from economic saboteurs carting away the nation’s crude oil and other petroleum products.

“Few days ago, we commissioned eight gunboats in Port Harcourt, to wage a full scale war against oil theft and illegal bunkering.

“We will not be deterred from protecting our commonwealth and improving government’s revenue in this sector,” he reassured.