Ikenga urged the public to make use of the free download of the “NPF rescue me app” which is available both on Android and Apple IOS, for Android and iPhone users respectively. 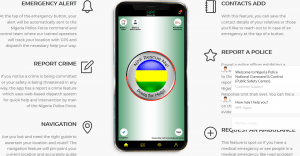 Anambra Police Command, has reiterated its commitment to secure the lives and property of Anambra residents, and urged the public to make maximum use of the “NPF rescue me app”.

The state command’s Public Relation Officer, DSP Tochukwu Ikenga, made the disclosure in an interview with The News Agency of Nigeria (NAN) in Awka on Saturday.

Ikenga urged the public to make use of the free download of the “NPF rescue me app” which is available both on Android and Apple IOS, for Android and iPhone users respectively.

He said that the command could also be reached on 07039194332 for prompt responses irrespective of the time of call.

The PPRO said that security is actually everyone’s responsibility and appeal to the public to be very attentive and vigilant to their environment and report any  suspicious activities or movements within their domain either through phone calls, NPF app or the nearest police station.

“Parading suspects at times is not to showcase the achievement of the command but to let the public know that these unlawful citizens are not invisible. We can do much better than we are doing now if we get quality information,” he said.

Ikenga reassured the public of the command’s eagerness to provide security to the State at large and solicit for the public common synergy.

He disclosed that the State Police Command has reinforced Ihiala and its environs following a trending video of SUV’s and Hilux vehicles carrying young men that are welding arms to yet unidentified location.

Ikenga said information from eyewitness accounts show that violent clash ensued between two criminal gangs and further details confirmed the killing of one Innocent Obieke (a k a double lion) and three others.

He said that Double lion has been on the police wanted list and has featured in attacks on police formations, military locations and other government infrastructures.

Meanwhile, Police patrol is ongoing in the area and the situation is being monitored.