Evacuate refuse in Calabar to prevent epidemic, residents cry out

A resident of Ambo Street, Mr John Eyo, told NAN that the massive waste from Mbukpa Market that had not been evacuated for over a month now has moved into the adjoining Ambo Street. 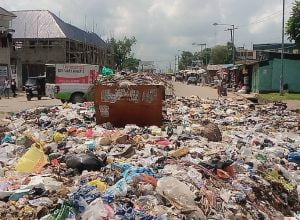 Calabar, which used to be one of the cleanest cities in Nigeria with its well-planned greenery is today a shadow of itself with massive and crawling waste dumped at so many points in the city.

The News Agency of Nigeria (NAN) correspondent, who went round the city, discovered that most of the refuse points were overflowing, moving into the streets and blocking major roads because they had not been evacuated for weeks.

NAN also reports that the markets are the worst hit with foodstuff traders seen selling their wares beside massive piles of refuse with disgusting stench and flies in areas visited.

A resident of Ambo Street, Mr John Eyo, told NAN that the massive waste from Mbukpa Market that had not been evacuated for over a month now has moved into the adjoining Ambo Street.

“The refuse is taking over the streets and how will the children play without picking up diseases?

“The women traders who sell by the side of the market have been displaced, those who are able to brave it are exposing the food that the public will eat to danger with the smell and flies that are everywhere, are we not calling for an epidemic?” he said.

At the popular Watt Market, Mrs Theresa Obasi, a water-leaf trader, said she could not help it as she had children to feed, adding that she used to tie a piece of cloth around her nose because of the stench.

She also told NAN that she only removed the cloth from her nostrils when gasping for breath.

Ms Esther Bassey, Chairperson of Calabar South Local Government Area, said that for more than five months the council was evacuating waste in the area but could not continue due to its meagre resources.

According to Bassey, the state has a Ministry of Environment and a Waste Management Board responsible for waste evacuation and should do so, adding that “there are boys in the LGA ready to work”.

“I had a meeting with them on June 7 and they said money has not been released to them and that their trucks were having issues which they are trying to fix after which evacuation will commence,” she said.

On his part, Mr Sunday Oko, General Manager, Cross River Waste Management Board, said they were aware of the situation, adding that their challenge was with their equipment at the general dump site; not with evacuation.

“When you evacuate and don’t know where to drop it, that is a problem and that is the challenge we have.

“If you go to the general dump site in Lemna, the trucks filled with waste are all parked there unable to empty their contents.

“This is because of the challenge we have with our equipment at the site, this is why the trucks cannot go back to town.
“We have gone round to meet with the Chairpersons of LGAs, heads of unions at Mbukpa Market, Watt Market and Marian Market, all in Calabar, to seek their support and cooperation on the way forward.
“The issue is more technical and not actually about funding, for example the distance between Calabar South to the general dump site is far, this sometimes affects evacuation.
“Another challenge is the level of waste generated in Calabar South due to its population; you evacuate in the morning and when you come back in the evening, it looks like you did not come there at all,” he said.
He said that they would begin massive evacuation of refuse from Calabar South and all the other areas where evacuation is needed before the end of the week.
(NAN)

China now one of world’s busiest countries in transportation