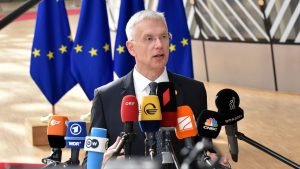 EU leaders on Friday warned that “cheap energy is gone” and agreed to boost preparations for further cuts in Russian gas.

The EU accused Moscow of “weaponising” energy via a supply squeeze which Germany warned could partly shut its industry.

European Council chief Charles Michel said at a news conference as the two-day summit ended that the inflation was a major concern for all of us.

Michel said Russia’s war of aggression was pushing up the price of food, energy and commodities.

He added that leaders had agreed to closely coordinate their economic policy responses.

The summit agreed few concrete steps but the leaders tasked the European Commission with finding more ways to secure “supply at affordable prices because of the weaponisation of gas by Russia.

European Commission chief Ursula von der Leyen said the search for alternative supplies was already in progress, with U.S. LNG deliveries up 75 per cent this year from last year, and Norway pipeline gas deliveries up 15 per cent.

Meanwhile, she said the EU executive would present a plan on preparedness for more gas cuts from Russia to leaders in July.

The European Commission would come up with proposals and options to discuss at a next EU summit in October.