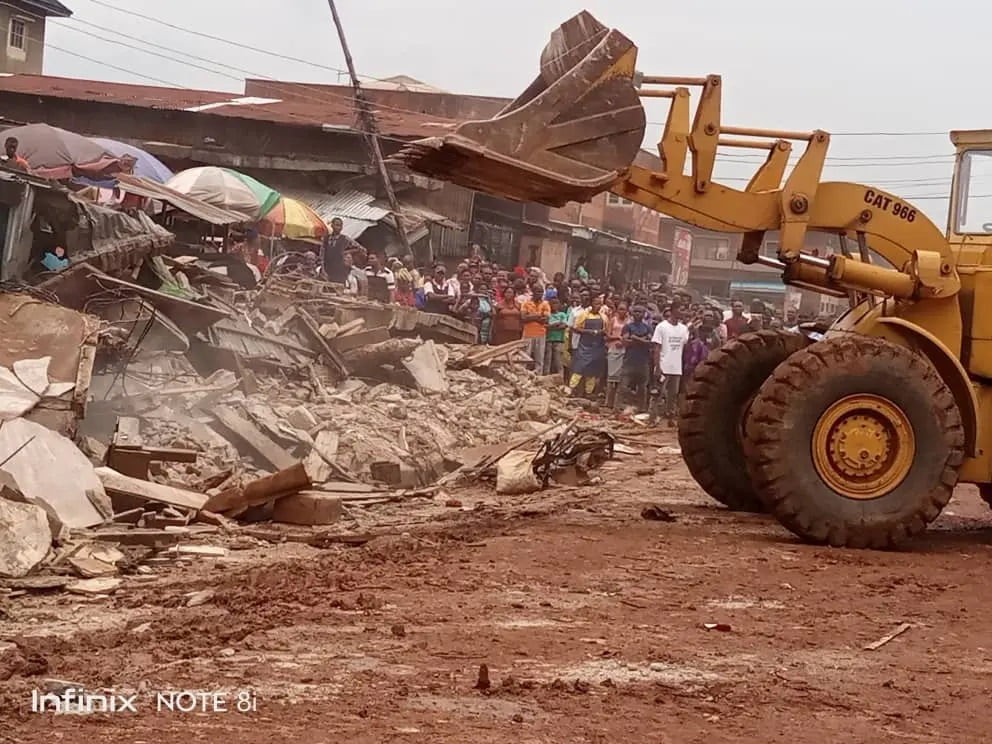 The Enugu Capital Territory Development Authority (ECTDA) on Thursday demolished popular Kenyatta Building Market after traders refused to relocate to International market built for them by the state government.

The News Agency of Nigeria (NAN) reports that there was pandemonium in the area as traders were struggling to evacuate their goods and other valuables.

There were also presence of combined team of security personnel that blocked the entrance and exit of the market to maintain peace and order.

Speaking on the development, Chairman of the ECTDA, Dr Josef Onoh, said the demolition was part of the agency’s development exercise and enforcement of court’s order.

According to him, as the city expands and population grow, there is need to create environment to contain development.

He, however, recalled that sometime in the 60s, where the market was located was given to the Youth Council of Nigeria but they abused the purpose clause of the agreement.

“What did they do, they went into wanton sales of the land to traders, leaving the initial purpose for which the land was given.

“The activities of these traders are not only halting the economic of the state but also, affecting the development and growth of the city.

“We now have an over populated arena which has contravened the city plan development and we had given them successive notices to move to new International market at Ugwuaji,” he said.

Onoh added that the New International Market had been developed and designed to accommodate them but they refused to relocate.

He said, “For two years now, I have been meeting with the leaders of the market but they are not in unity.

“We gave them all the necessary notice but they took our leniency for granted as each time they threatened to thwart the movement. They should blame their leaders not government,” Onoh said.

Corroborating what Onoh said, the Chairman, Kenyatta Market Traders Association, Mr Chuba Igwesi said, it had been long quitting notices had been issued to them but many traders found it difficult to relocate.

He said, “Number of notices and letters has been given and I even advised most of them on the need to obey government and relocate”.

He said that shops were given to them at very affordable price but many traders did not take it serious even after sensitising them.

According to the Chairman, some bought their own while some kept telling others that it would not work, even others that bought theirs still went back to Kenyatta market.

He added that getting a shop at the International market was not difficult as some traders speculated.

“The shops were given to us at the rate of N210, 000 with the initial payment of N110, 000, while some traders said they were comfortable at Kenyatta, others saw it as an opportunity.

“It is people that bought up to four to five shops that were resold  to traders at higher price.

Advising his members, Igwesi urged them to make a move immediately as there were enough space at the new market for all the traders.

Meanwhile, some traders in the market had alleged that the shops were too expensive for them to rent compared to what they are paying at Kenyatta market.

A paint seller, Emmanuel Agbo described the action of ECTDA as “wicked”, stressing that the exercise had made him lose some of his goods and other valuables.