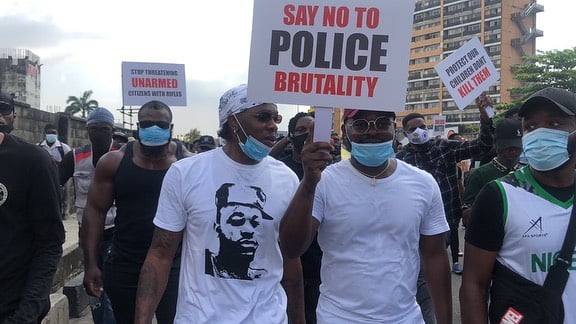 Under heavy police watch, dozens of protesters rallied in a procession of cars waving green and white national flags from windows at the Lekki tollgate in Lagos, the site of the crackdown on last year’s #EndSARS demonstrations.

Police deployed at Lekki allowed the cars to pass through the tollgate as protesters blasted horns and chanted for justice.

At least six people were arrested at Lekki though the main highway was not blocked by protesters, according to an AFP correspondent at the scene.

Last year’s rallies began over brutality by the SARS police unit but snowballed into protests over bad governance in the largest mass demonstrations in Nigeria’s modern history.

They came to a halt after October 20, 2020, when security forces shot at thousands of peaceful protesters gathered at the Lekki tollgate in Lagos.

Several dozen protesters also gathered in Abuja on Wednesday to mark the one-year anniversary, chanting “The people united can never be defeated”.

“We came here for the memorial. It’s very sad what happened. We are here to tell Nigerians and the world that we are still in pain,” said actress Princess Joy, 23, at the Abuja rally.

“We are not worried, this time is going to be peaceful, no fight, no quarrel, no nothing, except if the government wants.”

Messages calling on youths to rally in the capital Abuja, Lagos and Port Harcourt to “honour the memory of the victims” have been shared tens of thousands of times across social networks.

The crackdown at Lekki tollgate was live-streamed on social media and Amnesty International has since said it has confirmed that at least 10 people were killed.

The Nigerian army denied shooting live rounds, telling a judicial panel only blanks were used to disperse a crowd that had violated a curfew.

The protest movement is named after the social media hashtag #EndSARS, a reference to the notorious Special Anti-Robbery Squad (SARS) unit that was later disbanded.

Nigerian singer Falz, who has over eight million followers on Instagram, was among those who planned rallies in Lagos.

“It is impossible for us not to memorialise our fallen heroes,” Falz wrote. “We will never ever forget.”

“Innocent Nigerian citizens waved flags and sang till they were shot at, injured and killed.”

Recent weeks have seen multiple warnings against more EndSARS protests by the authorities, who say they turned into rioting and pillaging last year.

According to Amnesty, at least 56 people died nationwide during the weeks of protests in 2020.

Police reported 51 civilians and 22 officers killed in and around the demonstrations, with 205 police stations and other buildings set ablaze or vandalised.

In February, several dozen protesters gathered at the Lekki tollgate to demand justice for the victims of the crackdown. All the protesters were arrested.

Lawyer Moe Odele took to Twitter to urge all lawyers who tried to represent those arrested to “stand by tomorrow” for the memorial.

A major deployment of security forces had been expected Wednesday in Lagos, particularly at the Lekki tollgate, where several police units were already deployed over recent nights.

In the federal capital Abuja, a gathering was scheduled at the Unity fountain, the scene of previous demonstrations and physical attacks on protesters last year.

At other southern cities including Port Harcourt and Nsukka, candle-lit marches are set for the evening.

It said it had interviewed 54 people, including victims and their family members, protesters, civil society members, doctors and journalists.

The rights group was unable to confirm a death toll but witnesses told researchers they saw “what appeared to be at least 15 lifeless bodies and that military officers had taken away at least 11.”

“Failure to pursue justice will strengthen the culture of impunity and reinforce the perceptions that brought protesters to the streets in the first place,” said HRW researcher Anietie Ewang.

Nigeria set up the judicial panel last year to investigate the bloodshed and wider allegations of police abuses.

Public hearings ended on Monday and its findings should shortly go to the government.