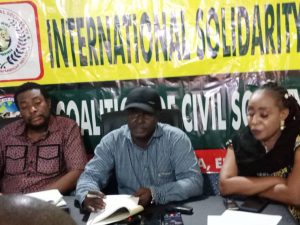 The Convener of the coalition, Mr Osmond Ugwu, made the call in Enugu at a news Conference in Enugu.

Ugwu called on Nigerians to rise to the challenge of ending electoral manipulations, merchandising of elective offices by politicians and exclusion of credible persons from contesting elective offices through high cost of expression of interest forms.

He said that the coalition appreciated the interest being exhibited by the electorate in getting their PVCs recently.

Ugwu also urged every person of voting age to get his or her PVC, ensure they voted with it in the 2023 general elections and resist every monetary inducements and intimidation during elections.

“To this end, we call on the electorate not to vote for anyone that uses money to buy his or her so-called victory during primaries for president, governor or representatives at the national and state assembly levels.

“At the same time, vote out political parties that raise their expression of interest/nomination forms beyond the reach of civil servants and lecturers who wish to contest for offices of the president, governor, national and state Assembly and local government chairman,” he said.

He urged the electorate to start now to inquire into the antecedents of every candidate while ensuring that those whom their source of wealth originated from government or those with undefined source of wealth were not voted.

“We urge all and sundry to join the crusade of holding elected and appointed officials accountable anywhere they serve, to ensure that their actions are in line with justice, due process and the rule of law.

“We particularly call on civil society organizations and the masses to start now to demand to know how much is being received by local, state, and Federal Government and how the monies are being used and by who,” he said.

He called on youths, men and women of good conscience, to stop feeling unconcerned on the way they were being ruled and how the resources of the people were being used.