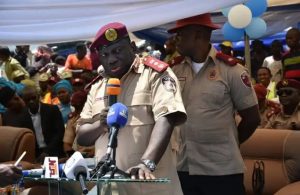 The News Agency of Nigeria (NAN) reports that the campaign had, as its theme: “Avoid Speeding, Overloading and Unsafe Tyers to Arrive Alive.”

He said that the equipments were part of the logistics set aside for patrol and special operations.

Biu added that, as part of the strategies, a total of 22 help areas had been set aside for the operation to ensure prompt removal of obstructions, death and injuries during the ember period.

The acting corps marshal noted that the logistics were in addition to the various traffic control camps which would be dedicated to identifying the areas prone to traffic gridlock to be manned by personnel throughout the ember months.

He said that the commission would combine the engagement of the motoring public through purposeful and impactful public education programmes, strengthen surveillance activities to regulate unprofessional excesses, sustain effective patrol operations as well as ensure adequate monitoring on highways.

He urged all commanding officers to step up patrol operations and ensure strict enforcement of critical offences, such as overloading, driving rickety vehicles,
excessive smoke emission, speed limit violations, overloading and drunk driving, among others.

“We are conscious of the fact that FRSC alone cannot shoulder the responsibilities of ensuring safer road environment.

“The commission has directed commanding officers to liaise with other strategic stakeholders within their operational areas for the needed moral and logistics as well as security support,” he said.

Biu said that FRSC was working assiduously to ensure significant shift in the attitude of motorists in 2022.

He said Nigerians must be aware that frequent cases of road crashes on roads was not linked to any fortuitous reason, but increase in human and vehicular movement, bad driving behaviours and impatience.

The corps marshal also identified bad driving behaviours as one of the factors affecting the state of road infrastructures which, he said, cost lot of tax payers’ resources to put in place.

He explained that the idea of taking the message of safety to motor parks was due to the critical roles the union members and officials were playing on the road.

“This campaign is a timely reminder that drinking and driving, overloading of vehicles, use of worn-out tyres, lane indiscipline and excessive speeding pose threat to the lives and property of all road users,” he said.

He thanked President Muhammadu Buhari for his commitment to safety of lives of commuters through massive deployment of resources for construction of new roads and rehabilitation of the existing ones across the country.

Biu also thanked Kaduna State government for rehabilitation and constructions of roads and the establishment of three trailer parks in the state, stressing that these would help FRSC in realising its mandate.

Earlier, the FRSC Zonal Commanding Officer in the state, Godwin Omiko, said that the ember months’ campaign was timely, particularly as it coincided with the kick-off of political campaigns across the country.

He called on road users to ensure strict adherence to traffic rules and regulations.