The result meant the forward handed the Moroccan side their first title since 2017, when they coincidentally beat the Egyptian side again to lift the crown. 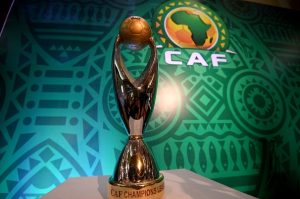 El Moutaraji who missed the second leg of the semi-final against Petro de Luanda due to suspension scored a goal in either half at the Mohamed V Stadium in Casablanca.

The result meant the forward handed the Moroccan side their first title since 2017, when they coincidentally beat the Egyptian side again to lift the crown.

Al Ahly’s dream of becoming the first team to win three consecutive titles and clinching a record extending 11th were swept away as a result.

In front of a packed stadium, noise decibels cranking up in the maximum, Wydad could not think of a loss.

They showed their intent from the word go, the sound in the stadium injecting the hunger of a title into their veins.

The brilliant start created the first chance of the game after just 10 minutes when Yahya Jebrane won the ball in midfield before spraying Guy Mbenza through.

However, the Congo Brazzaville forward’s rasping shot from the edge of the area came off the bar.

But that served as the warning bell to Al Ahly and, five minutes later, they were picking the ball in their net, thanks to a scorching effort from El Moutaraji.

This was after Al Ahly lost the ball cheaply on the right, and El Moutaraji picked on his wheels before unleashing an unstoppable belter from range.

Shortly after conceding, Al Ahly came alive and turned the game in their favour.

In the 19th minute, Ali Maaloul curled in an inviting ball to Hussein El Shahaat, but the latter’s effort at goal was picked out by the goalkeeper.

Taher Mohamed sighted space from distance for a shot In the 22nd minute, but it was deflected out for a corner-kick.

The now former champions won two more in succession and, on the second, Yasser Ibrahim flashed a header just wide after peeling off his marker to connect to Maaloul’s delivery.

Al Ahly were almost caught on the counter in the 31st minute when the influential Jebrane picked the ball and fed off Reda Jaadi who slapped a low ball to Mbenza.

However, the burly forward’s shot went wide, much to the relief of the Egyptian side.

They continued their dominance and overall had 68 percent of possession in the opening half, but could not score a goal for their effort.

In the second half, Wydad completed the job.

They were fast off the blocks once again and just two minutes in, it was 2-0 and the stadium’s roof was lifted with celebration.

A superb counter-attack saw Jaadi go off on the right before slashing a cross.

El Moutaraji sneaked behind Mohamed Hany to tap the ball but it was saved by Mohamed Elshenawy.

But on the second bite of the cherry off the spilled ball, the forward thumped home.

With a two-goal burden to carry, coach Mosimane threw caution out of the window.

Later on, defender Hany came off for Salah Mohsen as Amr El Solia was brought in for Hamdi Fathi.

The offensive changes forced Wydad to defend from deep.

Al Ahly had the chances as Afsha’s shot from distance was saved by Ahmed Reda Tagnaouti while Maaloul had another fly over from inside the penalty box.

Mohsen came close nine minutes from time when he ran on to a free-kick inside the goal area, but Tagnaouti made a close range save.

Al Ahly piled in more pressure, but it never seemed to be their day as they could not conjure a way back, their chase at history ending in a mirage in Casablanca.

The News Agency of Nigeria (NAN) reports that the African Champions League final match, now a one-leg affair, was played in Casablanca because the city won the hosting bid.