“The people of Ekiti State who had sleepless nights in order to protect their votes, those who rejected the cash being thrown around to buy their votes and the intimidation to force them to compromise their belief, deserve our praise. 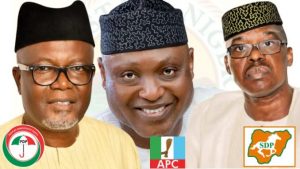 A chieftain of the All Progressives Congress (APC) in Ekiti, Kayode Babade, has described the outcome of Saturday’s governorship election as the true wishes of the people.

Babade, who is the APC agent at the Independent National Electoral Commission (INEC) collation centre, said the people have shown that they stood firmly behind their governor, against all odds, to vote for the candidate of their choice.

The APC chieftain told the News Agency of Nigeria (NAN) in Ado-Ekiti on Sunday, while reacting to the victory of the party in the election, that the outcome represents the will of the people to vote in free, fair, credible and peaceful elections.

“The people of Ekiti State who had sleepless nights in order to protect their votes, those who rejected the cash being thrown around to buy their votes and the intimidation to force them to compromise their belief, deserve our praise.

“Therefore, my congratulations go to all the people of Ekiti State.

“Let me also give kudos to the leaders and supporters of our party, the APC, for working together to achieve this victory.

“The APC leaders and members in Ekiti State who whole-heartedly accepted Gov. Kayode Fayemi since he mounted the number one seat in the state and cooperated with him to bring about this victory deserve to be appreciated,” Babade, who is the Chairman, Board for Technical and Vocational Education, said.

Also, the Director, Media and Publicity of Biodun Abayomi Oyebanji (BAO) Campaign Organisation, Chief Taiwo Olatubosun, said the results of the election represent the fact that the people actually desire to be governed by a truly democratic government headed by those they genuinely voted for.

Olatubosun, a former Deputy Speaker of the State House of Assembly, said the results represent the fact that the security and electoral officials can conduct free and fair elections if they have the right atmosphere.

“We are happy that throughout this election, we did not see the military brutalising the people or security officials supervising the snatching of ballot boxes and vandalisation of votes.

“Thus, the military and other security agencies deserve commendation for this successful poll.

“We also saw how the INEC officials maturely handled the complaints of various election centres that could have ordinarily create confusion.

“The INEC and its officials deserve to be commended for their neutrality in this election.

“We can see that the result represents realistic figures from one local government area to the other. No case of outlandish figures being reeled out; that is also a sign of some level of credibility in the process.

“It is for the above reasons that I have to commend President Muhammadu Buhari for keeping the military out of this election and for giving the instructions that led to the apparent neutrality of members of INEC and other security officials in the entire process.

“The Ekiti election result is a victory for our country, her people and democracy. We have shown that the glory of the country is more valuable to the citizens than the wish of a tiny power clique,” Olatubosun, who is the chairman of the state House of Assembly Service Commission, said.

The duo therefore called on the Governor-elect, Mr Biodun Oyebanji, to see his election as an opportunity to deliver on his campaign promises and to continually work to actualise the wishes and aspirations of the Ekiti people.

NAN recalled that Prof. Oyebode Adebowale, the INEC Returning Officer, declared Oyebanji winner of the Saturday’s governorship election with a total votes of 187, 057.

He said that Oyebanji had certified the law and was, therefore, declared the winner.

“That I, Prof. Oyebode Adebowale, hereby satified that I am the Returning Officer of the Ekiti 2022 Governorship Election held on June 18.

The INEC Returning Officer, who is also the Vice-Chancellor, University of Ibadan, while given the break down of the total votes scored by the participated political parties, said that Mr Segun Oni, the Social Democratic Party (SDP) candidate, scored 82, 211 votes to come second.

According to him, others are the Peoples Democratic Party (PDP) candidate, Chief Bisi Kolawole, with 67,457 votes; Accord (A) scored 166; African Action Congress (AAC) 409; All Progressives Grand Alliance,(APGA) 17 while Action Democratic Congress (ADC) polled 141 votes.