Suez Canal stretches from Port Said on the Mediterranean Sea to the city of Suez on the north eastern shores of the Gulf of Suez, separating Egypt from the Sinai Peninsula. 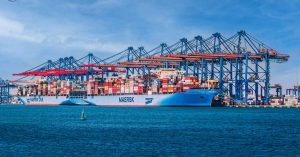 International maritime traffic has hit record high at the Suez Cana in Egypt, generating about $15 million daily for the prosperous North African country in recent months.

Mr Gorge Safwat, Spokesman for the Suez Canal Authority (SCA), made the disclosure on Thursday, while hosting 27 top journalists from sub-Saharan Africa at the headquarters of the company in Ismailia District, northeast of Cairo.

Suez Canal stretches from Port Said on the Mediterranean Sea to the city of Suez on the north eastern shores of the Gulf of Suez, separating Egypt from the Sinai Peninsula.

He said that the canal, the longest man-made in the world, had recorded increased revenue, generating about $5.61 billion in 2020, due to determination and doggedness of Egyptians.

Safwat announced that the company made about $6.3 billion from its activities last year, saying that construction of the canal 152 years ago, demonstrated will power and can-do spirit of the citizens of the Arab nation.

Tracing the history of the canal, the spokesman said it took the labour about one million Egyptians and 120,000 deaths to put the canal in place in 1859.

Safwat noted that the number of ships using the canal daily had also increased from 45 per day in 2015 to 60 per day at present, describing the route as one of the safest in the world.

In March 2021, a huge container ship, known as Ever Given, belonging to Evergreen Shipping Lines, got wedged and blocked the Suez Canal, disrupting global maritime trade for weeks.

However, the ship, which was impounded by the Egyptian Government was later released after agreeing a deal on compensation with the government.

The 193-km Suez Canal connects the Mediterranean Sea at the canal’s northern end to the Red Sea in the south and it provides the shortest link between Asia and Europe.

A News Agency of Nigeria (NAN) correspondent on the trip reports that authorities of the SCA took the visiting journalists on a boat cruise on the old and new canals built by the government.

The journalists noticed the intense maritime activity taking place round the hour on the canal, helping to boost the prosperity of the North African country.

Egypt, which is currently one of Africa’s biggest economies, has embarked on various developmental projects, to sustain its position as pacesetter in both the Arab world and sub-Saharan Africa.

The rich North African country has a population of about 106 million people, making it the third largest country in Africa.