It said this would be utilising purchase options and purchase rights under the existing contract with Airbus. 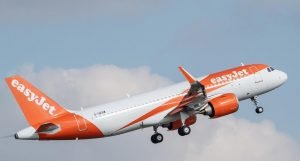 The British low-cost airline Easyjet says it wants to push ahead with the renewal of its fleet with another major purchase from Airbus.

EasyJet plc said it entered into conditional arrangements with Airbus, under which Airbus had agreed to supply 56 A320neo family aircraft for delivery between 2026 and 2029.

It said this would be utilising purchase options and purchase rights under the existing contract with Airbus.

In addition, the company proposed to convert 18 A320neo aircraft planned for delivery between 2024 and 2027 to 18 A321neo aircraft deliveries.

The company had also entered into conditional arrangements with CFM International to ensure that the commitments given under the current engine supply agreement between the company and CFM will cover aircraft delivered under the Airbus Amendment.

Further, the company stated that the proposed purchase would substantially complete the 2013 Airbus Agreement with Airbus whilst also securing delivery slots between 2026 and 2029 to replace aircraft leaving the fleet.

Johan Lundgren, easyJet Chief Executive said: “The proposed purchase firms up our orders with Airbus between FY 2026 and FY 2029.

“It is continuing the company’s fleet refresh, as the older A319s and A320s leave the airline and new A320 and A321 neo aircraft enter, providing benefits to easyJet through up gauging, cost efficiencies and sustainability enhancements.

“We believe this will support positive returns for the business and the delivery of our strategic objectives.’’