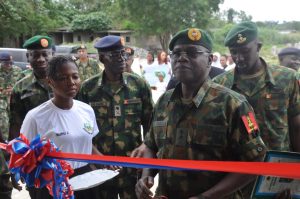 The Chief Of Army Staff (COAS), Lt.-Gen. Faruk Yahaya, says the capital injection of €10.7M by UZ Carlson Pharmaceutical Limited will be a pharmaceutical revolution in the Nigerian Army Drugs Manufacturing Company (NADMC).

Yahaya said this on the occasion of the Groundbreaking Ceremony for the Joint establishment of a Pharmaceutical Drugs Manufacturing Plant which held on Wednesday at Epe, Lagos State.

The joint establishment was between the Nigerian Army Welfare Limited by Guarantee (NAWLG) and UZ Carlson Pharmaceutical Limited to address the issues of shortage and adulterated drugs in NA medical centres.

“This will hereby address the chronic problems of out-of-stock syndrome as well as the issue of fake drugs faced by personnel and their families in hospitals.

“Failure to meet this need will affect a soldier’s morale and his willingness to fight, resulting in dwindling loyalty,” he said.

The COAS said that the partnership would also address dependence on imports which would in turn boost internally generated revenue of the NA through public sales and exports to nearby countries.

“This partnership is premised on the huge market and demand already established in the open market and even to some state governments across the country.

“It is envisaged that the construction and operation of the new NADMC will create jobs for the teeming youths in the locality and contribute to economic well-being.

“Thus, NAWLG should drive the partnership and work out modalities for smooth execution of the agreement,” Yahaya said.

He said that the construction of the new Nigerian Army Drugs Manufacturing Company was in line with his aspiration to sustain a better civil military cooperation.

“Their services will surely be extended to the civil populace in the locality.

“We, therefore, urge members of the public to feel free to avail themselves of menial works toward the actualisation of the project,” the COAS said.

Also speaking, the MD of UZ Carlson Pharmaceuticals Company, Mr Callistus Okafor, said that the joint venture would upscale production within the next five five years.

Okafor pointed out that the pharmaceutical would ostensibly mitigate the challenges of fake drugs and produce high quality drugs of commercial value to promote local content.