She said the awareness campaign kicked off with a walk against domestic and sexual offences  from Military Hospital, Lagos to Falomo to sensitise the public to  the dangers of sexual and gender-based violence (SGBV). 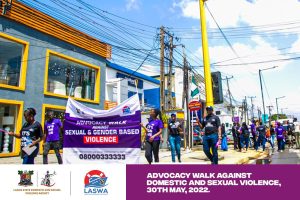 Domestic and Sexual Violence Agency (DSVA), said it was in partnership with the Lagos State Waterways Authority (LASWA), to sensitise members of the public to the dangers of domestic and sexual violence in the state.

Mrs Titilola Vivour-Adeniyi, Executive Secretary of DVSA, said this in a statement made available  to the News Agency of Nigeria (NAN) on Tuesday in Lagos.

Vivour-Adeniyi said that LASWA had begun an awareness campaign for those in the riverine areas, including residents of Lagos State that made use of the jetties as a means of transportation.

She said the awareness campaign kicked off with a walk against domestic and sexual offences  from Military Hospital, Lagos to Falomo to sensitise the public to  the dangers of sexual and gender-based violence (SGBV).

She also urged residents of Lagos State to see themselves as Mandated Reporters with a duty to say and do something whenever they saw something.

Vivour-Adeniyi  said in furtherance of the awareness campaign, fliers, posters and other information materials would be placed at all the ferry terminals, including Apapa ( Liverpool terminal), Ikorodu Baiyeku, Ikorodu, Badore – Tarzan terminal Ebutte Erro, Ijegun, Ebutte Ojo and  Falomo- 5 cowries.

She encouraged the public to take advantage of the DSVA’s support services toll-free number: 08000333333

The Managing Director of LASWA, Mr Oluwadamilola Emmanuel, appealed to participants to spread the message across the nooks and  crannies of the state and become ambassadors against Domestic and sexual violence in Lagos State.

Emmanuel emphasised the importance of inter-agency collaboration, explaining that a large number of Lagos residents made use of LASWA jetties and terminals daily, hence the reason for the joint sensitisation between LASWA and DSVA.