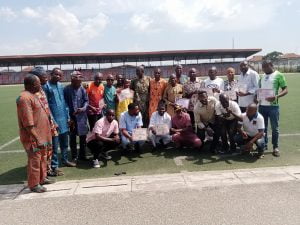 Some members of Sunshine Stars FC Supporters Club have appealed to the state government not to sell off a significant part of the heritage of sports-loving people of Ondo State.

The members made the appeal during the inauguration of the club’s newly-elected executive committee on Thursday at the Ondo State Sports Complex in Akure.

The News Agency of Nigeria (NAN) reports that the state’s Commissioner for Youth and Sports Development, Bamidele Ologun, had announced on Tuesday the government’s readiness to sell the club.

He had said, with the right investors, government was ready to sell the Akure-based club which was established in 1995 by retired Col. Ahmed Usman, the state’s Military Administrator then.

Chairman of the Supporters Club’s Executive Committee, Tunde Adeboboye, while speaking with newsmen immediately after their inaugurated, said the club had been the baby of the association since its creation.

“Sunshine Stars is our baby, and it was established by a Military Administration. It won’t be a good thing for the club to be sold by a civilian government.

“We have said it before, when we heard the rumour of the selling of the team and we are still reiterating that the government should not sell off the club.

“Sunshine Stars remain a source of happiness to many people in the state. Selling it is tantamount to taking some people’s joy away from them.

“We are not averse to partnership arrangements, but we are totally against selling off.”

Adeboboye said different governments have come and gone in the state and none had proposed the sale of the club.

”We will resist attempts to sell the club, but we will support a partnership that will promote the club.

“We are stakeholders as far as Sunshine Stars and Sunshine Queens (the state-owned female clubside) are concerned, and we will not allow the clubs to be sold.

“A lot of the clubs’ management committees have come and gone, but we have remain since the formation of the clubs,” he said.

Also, the immediate-past Chairman of the Supporters Club, Felix Olowa, while handing over the association’s Constitution to the executive committee urged the members not to deviate from the document’s tenets.

Olowa said they were not against the idea of Sunshine Stars’ partnership with any interested organisation to relieve the government financially, but would not support an outright sale.

Emeritus Chairman of the club, Emmanuel Oduyi, spoke on the issue.

”Government is a continuum and the present government should remember that they will leave the saddle one day and should just do their best and let the club be.”

Oduyi said he agreed with the argument that the club was not being run professionally and in the way the state governor wanted.

”He only needed to put a proper football administrator at the helm of affairs of the state football agency, who are the parents of Sunshine Stars, and he will see the results,” the former club chairman said.

He noted that if the club had been able to sell one or two players to make money for the state government, nobody would be talking about selling the club off.

“What I will say is that it will not be possible. This is one of the major sources of joy for people of the state.

”The government should just try its best to ensure that it continues to sponsor the team with the little it has and should kill the idea of selling it,” Oduyi said.

Earlier, at the event, while performing the swearing in, a legal practitioner, Akingbote Ilemobayo, advised the association’s members to be united and ensure they play their role as a motivator to the clubs.

He urged the association to discourage any form of hooliganism which could bring the name of the clubs to disrepute.