Farmers in the zone claimed that in spite of the subsidy on fertilizer by the Federal Government, they were still buying the product from the open market at exorbitant prices. 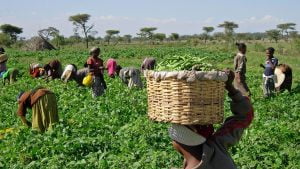 Farmers in the South-South geopolitical zone have called on the Federal Government not to engage politicians in fertilizer distribution, but rather engage dealers that would make the product directly available to them.

They made the calls on Wednesday while speaking with the News Agency of Nigeria (NAN) in a survey on the challenges farmers were facing due to the activities of middlemen in the distribution of Agriculture inputs, especially fertilizers.

Farmers in the zone claimed that in spite of the subsidy on fertilizer by the Federal Government, they were still buying the product from the open market at exorbitant prices.

Commenting, Mr Bassey Inwang, the Chairman, All Farmers Association of Nigeria (AFAN) in Akwa Ibom, said: “We do not enjoy subsidised fertilizers from the Federal Government.

“The Federal, State and Local Governments should collaborate to end high cost of fertilizers and ensure food sufficiency in the country.”

The AFAN chairman said that 50kg of fertilizer, which now cost between N12,000 and N15,000, was out of the reach for farmers in the state.

He said that high cost of fertilizers had affected yields as farmers were producing below the capacity.

Also, Mr Richard Asenime, the Chairman of AFAN in Delta,
complained that farmers in the state have difficulty in accessing fertilizer for their crops.

Asenime told NAN in Asaba that the product was very exorbitant to the extent that local farmers have to resort to cultivating their crops without applying fertilizer.

According to him, there is Federal Government subsidised fertilizers, but could not be accessed by all farmers.

“This has made it difficult to access the locally produced fertilizers, coupled with the challenge of Russia-Ukraine war, which has also affected the supply and prices of the imported ones.

“As things are going, I doubt if farmers will be able to meet their production target for the year, given these challenges.

“We have asked farmers not to rely on loans or support from the government, but go all out to source for money to enable them to produce food for their families.

“We have, however, cautioned them against going to shylock money lenders in order not to complicate issues,” he said.

Asenime said that most farmers in Delta had been trained by the state government and so, they could apply the knowledge to ensure good harvest.

“Now that farmers can’t afford fertilizers, all they need to do is to prepare their land, plant the crop and begin to pray to God for a good harvest.

“For this year, we have not received any support, in form of inputs from the government, but we have written to the governor for support,” he said.

In his remarks, Mr Etta Henry, the Director, Fertilizer and Agriculture Inputs, Cross River Ministry of Agriculture, said that government needs to work with agro-inputs dealers, not politicians, for effective distribution of fertilizer to farmers.

Henry said that politicians in charge of different agriculture-related agencies had their “personal targets” and not real farmers.

He said that government only needed to work with the registered agro-inputs dealers, who would be monitored as soon as fertilizers were made available.

“By so doing, farmers in different locations will be alerted on where they can pick the product.

“If we begin to allow politicians to handle fertilizers allocation and distribution, they will smuggle hijack the process.

“States should be responsible to register agro-inputs dealers of repute, while farmers should be paired to these agro dealers in their respective state.

“This will enable the farmers to walk into the warehouse of the dealers and get their fertilizer at the approved price.

“The best way is for us to return to the Federal Government’s Growth Enhancement Scheme (GES) introduced by Dr Akinwumi Adeshina, a former Minister of Agriculture,” Henry said.

“Nigerian farmers can not forget the Federal Government’s Growth Enhancement Scheme (GES) easily, where government paid 50 per cent and allow farmers to pay only 50 per cent cost of agro inputs.

“During the period that GES was implemented, most Nigerian farmers were directly impacted as fertilizers disbursement was done, using the farmers’ database, such as their phone contacts,” Akandu said.

He told NAN that currently in Rivers, there was no government subsidised fertilizers that could impact the farmers directly.

“The ongoing Federal Government’s fertilizer initiative is for the fertilizers production companies and multinationals like Indorama, Notori, Wacot and other fertilizers blending companies.

“For us as dealers and middlemen, currently, there is no government intervention in the area of subsidy.

“Two weeks ago, we bought a 50kg bag of Urea for N15, 200 from Indorama fertilizer company and distributed at the rate of N16,000 to retailers and farmers.

Meanwhile, farmers in the state are complaining about high cost of fertilizer and other agro imputs, as they urge the government to ensure fertilizer subsidy so as to check food shortage.

“This is affecting farmers in the state. For instance, it is estimated that one hectre of cassava farm takes as much as eight bags of 50kg fertilizer, as well as other agro enhancement deliverables.

“How many cassava farmers can make profit after spending as much as N184, 000 on fertilizer per hectre and addressing other needs like labour, seeds and paste control,” a farmer, Mrs Agnes Woka said.

On his part, Mr Nathaniel Ellem, the Chairman of All Farmers Association of Nigeria (AFAN) in Cross River, said that for government to succeed in effective fertilizer distribution, it should work with the association.

According to Ellem, it is only AFAN that knows all farmers at the grassroots and how to get in touch with them whenever fertilizer is available.

“The problem is that government does not want to make use of AFAN and they are missing the point, because these are people who know the farmers down to the grassroots,” he said.

Also, Mr Wellington Omoragbon, the State Director of Agriculture, Federal Ministry of Agriculture and Rural Development, said that reintroduction of price control board would help to check the excesses of middlemen in agribusiness.

Omoragbon told NAN in Benin that prices of commodities, including agriculture inputs, had increased because of high cost of transportation, resulting from bad roads.

“We are also of the opinion that if government subsidises agriculture and encourages farmers to scale up food production, farm produce will be surplus and the middlemen will become irrelevant.

“If government can rehabilitate rural roads and invest in transportation for the evacuation of agriculture produce, prices of commodities will not increase, no matter the activities of middlemen,” he said.