Development of China-Gambia ties will benefit both countries

He said that China would continue to support Gambia’s efforts for national development and improving its people’s well-being. 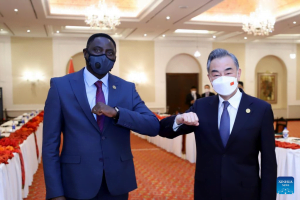 Chinese State Councilor and Foreign Minister Wang Yi says the healthy development of the China-Gambia relations will benefit both countries.

Yi made the remarks while meeting with Mamadou Tangara, Gambian Minister of Foreign Affairs and International Cooperation, on the sideline of the 48th session of the Council of Foreign Ministers of the Organisation of Islamic Cooperation (OIC) held in Islamabad.

He said that China appreciates Gambia having adhered to the one-China policy to maintain the political foundation for bilateral relations since the two countries resumed diplomatic relations.

Yi said that the two countries’ mutual support in international affairs had showed that bilateral relations were at a high level.

He said that China would continue to support Gambia’s efforts for national development and improving its people’s well-being.

During the meeting, the Chinese foreign minister also said that China was willing to work with Gambia to strengthen bilateral strategic communication.

According to him, China will also jointly safeguard the principle of non-interference in each other’s internal affairs, the basic norm governing international relations which is of crucial importance to the developing countries.

Yi said that China has never engaged in proxy wars nor sought so-called spheres of influence.

He said that China opposes power politics and bloc confrontation, but stands for equality among all countries regardless of their sizes, and advocates promoting greater democracy in international relations.

Yi congratulated Gambia for its decision to host the upcoming OIC summit this year, saying that Gambia would continue to play an active role in the OIC, boosting the solidarity and advance of the Islamic world.

Tangara said the relations between his country and China had weathered changing circumstances and moved forward steadily, enjoying smooth progresses in their cooperation in every field as well as a reliable and strong partnership.

The Gambian foreign minister also noted that China had played a leading role in promoting global development and made significant contributions to the world’s joint fight against COVID-19.