Ologunagba said that more than ever before, Nigerians were now determined to fully entrench the democratic demands of credible elections, which is at the core of the Democracy Day celebration. 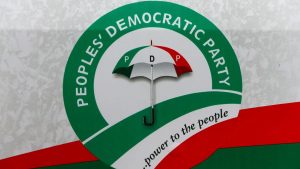 The Peoples Democratic Party (PDP) has advised the Federal Government to take practical steps to guarantee the conduct of free, fair and transparent general elections in 2023.

The party gave the advice in a statement issued by its National Publicity Secretary, Mr Debo Ologunagba, to mark the 2022 Democracy Day.

Ologunagba said that more than ever before, Nigerians were now determined to fully entrench the democratic demands of credible elections, which is at the core of the Democracy Day celebration.

He said the party demanded that in 2023 security agencies and thugs should not be used to suppress voters, in addition to guaranteeing that only votes cast at the polling units were transmitted and declared

He said that June 12 also embodies the struggle by Nigerians against corrupt, suppressive and dictatorial forces; against lawless, insensitive, anti-people and terrorism, injustice, high-handedness, recklessness and incurable impunity.

He condemned all forms of acts against substance, value and quintessence of June 12 Democracy Day; the democratic principles of Constitutional Order, freedom, justice, fairness and equity as well as the much-desired national cohesion and tolerance which Chief MKO Abiola personified and died for.

Ologunagba said that the PDP cautioned against abuse of process, violation of human rights, nepotism, electoral manipulations, stifling of freedom of speech, promotion of violence; pattern of the dark era of military dictatorship in our country, which Chief MKO Abiola fought against.

He also urged Nigerians to use the occasion of the June 12 to reaffirm their determination in the 2023 general elections.

“Our party urges all leaders across the country to reflect on the essence of June 12 in all their activities so as to build a nation guided by the democratic principles of the Rule of Law, mutual respect and unity of purpose.”

“The PDP prays for the nation and wishes Nigerians a successful Democracy Day Celebration,” he said.