Puchercos said the move to increase production at the Okpella plant was part of the company’s efforts to increase cement supply in Nigeria and ensure timely supply of products in the South-South and Southeast geo-political regions. 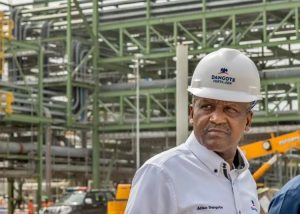 Dangote Cement Plc, has ramped up production at its newest plant, in Okpella, Edo, as its earnings per share rose by 16.8 per cent to N6.18 for the first quarter ended March 31, 2022.

Chief Executive Officer, Dangote Cement, Mr Michel Puchercos, made this known in a statement on Wednesday in Lagos.

Puchercos said the move to increase production at the Okpella plant was part of the company’s efforts to increase cement supply in Nigeria and ensure timely supply of products in the South-South and Southeast geo-political regions.

He added that analysis of the company’s first quarter results indicated that it sold a total volume of 7.2 metric tones (Mt) with Nigeria accounting for 4.8Mt and the rest of Africa; the balance of 2.4Mt.

He said the company started the first quarter on a positive note in spite of uncertainties brought by a very volatile global environment.

He stated that increases were recorded in revenue and profitability that drove strong cash generation across the Group.

According to him, profit after tax rose to N105.9 billion, up 18 per cent compared to last year’s while Group earnings before interest, taxes, depreciation and amortisation (EBITDA) rose to  N211.0 billion, up by 18.6 per cent with an EBITDA margin of 51.1 per cent.

“On the operational side, we are ramping up production at our Okpella plant and are progressing well to deploy grinding plants to Ghana and Cote d’Ivoire.

“Demand remained strong across all markets, and we remain confident that Dangote Cement is positioned to meet customers’ expectations despite these temporary challenges,” he said.

He added that the company, in continuing its efforts to deliver shareholder value had completed the second tranche of its buyback programme.

Puchercos said following the completion of both tranches, Dangote Cement had bought back 0.98 per cent of its outstanding shares.

According to him, the share buy-back programme reflects the company’s commitment to finding opportunities beyond dividend to return cash to its shareholders.

“The volatile international context is strengthening our efforts to ramp up the usage of alternative fuels and execution of our export-to-import strategy.

“Reducing our dependence on imported inputs and making our markets self-sufficient has never been more relevant from a regional perspective.

“Our continuous focus on efficiency, meeting strong market demand and maintaining our costs leadership drives our ability to consistently deliver superior profitability and value to all shareholders,” he said.