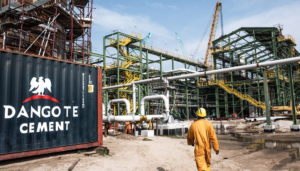 Dangote Cement Plc says its commitment to environmental disclosure and sustainability has yielded desired result with the Carbon Disclosure Project (CDP) raising the company’s rating from C to B-.

The Chief Executive Officer of the company, Mr Michel Puchercos, said this in a statement on Tuesday in Lagos, just as the company proposed a dividend of N20 per share for the year ended Dec. 31, 2021.

The CDP is an international non-profit organisation based in the UK, that runs global disclosure system for investors, companies, cities, states and regions, to manage their environmental impact.

It had raised the rating as a result of the company’s commitment to climate change.

Puchercos said the upgrade clearly illustrates the progress made by  Dangote Cement regarding commitment to transparency and mitigating its carbon dioxide footprint.

“We are pleased to be recognised by the progress we are making in our environmental disclosure and sustainability,” he said.

Puchercos said the cement company was focusing on making a positive difference, which is why sustainability is at the core of every part of its business.

He said that their alternative fuel project which aimed at leveraging waste management solutions, reducing CO2 emissions, and sourcing materials locally was at an advanced stage.

The CEO said that the company was focusing on the highest level of sound governance, with transparency and consistency at the core of every part of their business culture.

In its financials for full year ended Dec. 31, 2021, Group sales volume for Dangote Cement stands at 29.3Mt, with operation in Nigeria accounting for 18.61Mt and 10.86Mt in other countries.

The company recorded a gross profit of N538.37 billion and after-tax profit of N364.44 billion, with the directors proposing a dividend of N20.00 per share.