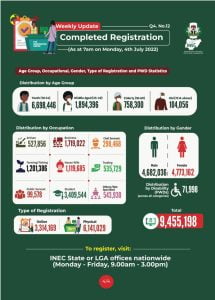 The commission disclosed this in its Quarter four, week 12 update released in Abuja on Wednesday.

The commission also disclosed that 9,455,198 registrants completed their registrations, out of which 3,314,169 registered through online and 6,141,029 registrants did physical registration.

The gender breakdown of the figure indicates that 4,682,036 of the registrants who completed their registrations are males, while 4,773,162 are females, of which 71,998 are Persons With Disabilities (PWDs)

The commission also disclosed that it had so far received 25,056,633 applications including those for voter transfer, requests for replacement of Permanent Voter Cards (PVCs), update of voter information record, among others.