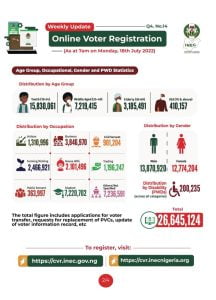 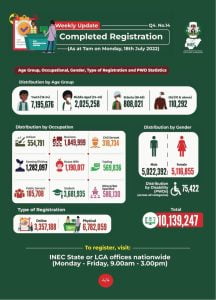 The Independent National Electoral Commission (INEC) says fresh registration in the nationwide Continuous Voter Registration (CVR) hit 10.1 million on Monday, July 18.
The commission said this in the quarter four, week 13 released on Monday night on its social media platform.
INEC said that 10,139,247 registrants had completed their registrations out of which 3,357,188 were done through online, while 6,782,059 were done via physical registration.
It said that 5,022,392 of the registrants that completed their registrations were males; while 5,116,855 were females and 75,422 were Persons With Disabilities.
READ ALSO:https://brandpowerng.com/cdd-commends-inec-on-osun-guber-poll/