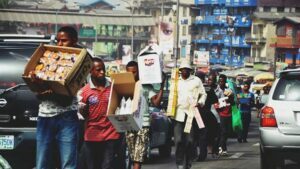 The Cross River Government on Thursday banned the hawking of corn and various wares on major highways, especially the Murtala Mohammed Highway in Calabar.
The ban is contained in a statement signed by Mr Tony Adinye, Chairman, Cross River Pollution Control Agency.
The chairman said the agency noticed with displeasure, the unwholesome activities of hawkers of various wares especially corn sellers along the Murtala  Mohammed Highway and major streets in the Calabar metropolis.
Adinye said in a bid to urgently sanitise the metropolis of every form of environmental pollution and bring decency to the aesthetic of the state, hawkers and corn sellers are instructed to relocate to interior streets on or before August 1.
According to him, failure to comply would be met with arrest and severe sanctions.
“While we understand the need for individuals to make additional income to cushion the effect of the harsh economic realities, we also need to make our state clean and green again.
READ ALSO:https://brandpowerng.com/ncaa-suspends-dana-air-operations-with-immediate-effect/
“Those dropping waste on the ground and leaving the dustbins provided by the Waste Management Agency are strongly cautioned to desist from such act.
“A team of security operatives have been mandated to arrest any person caught polluting the environment with these acts, all concerned by this notice are advised to be guided,” he said.
The News Agency of Nigeria (NAN) reports that Calabar, a one time cleanest city in Nigeria, has, in the last few months become a shadow of itself with overflowing refuse bins at different points in the metropolis.
(NAN)
Sign in
Welcome! Log into your account
Forgot your password? Get help
Password recovery
Recover your password
A password will be e-mailed to you.